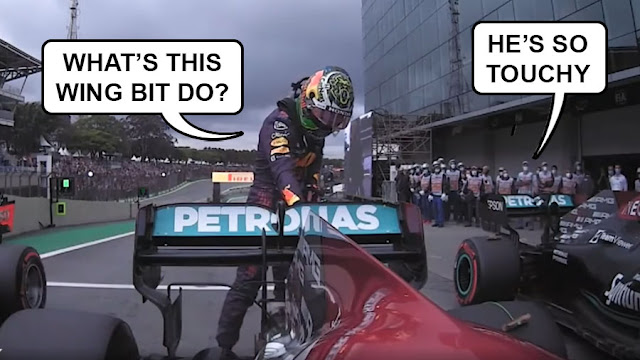 Carry on reading for all the Losers team action in Brazil.

And lo, Judas betrayed Jesus for 92 nuggets of silver, or whatever it was, and the angel did frown down from heaven. Here are the Judases in the F1 Losers League, betraying all that is loser-y about this upside-down fantasy league.

Remember, we ignore points gained from Boost Buttons for the Podium of Shame and for Break Assist, because teams shouldn't be penalised for boosting out of sync with other teams. However, losses from Punts and Forecasts do count. Here goes...

We use Break Assist to punish Losers teams that don't score enough. And perhaps to help them gain more points in the process. Again ignoring Boosted points. Here are our trio of teams that weren't terrible enough in Brazil:

Here are the Race points for Brazil.

It's Qatar next on the F1 calendar, so expect a "while my Qatar gently weeps" pun in our next race update. On December 1st, every single unpressed Boost Button will get automatically pressed, which means we'll be going into the Saudi Arabia grand prix in December bursting with boosts.