Time for a decision: DRS dreams in Portugal 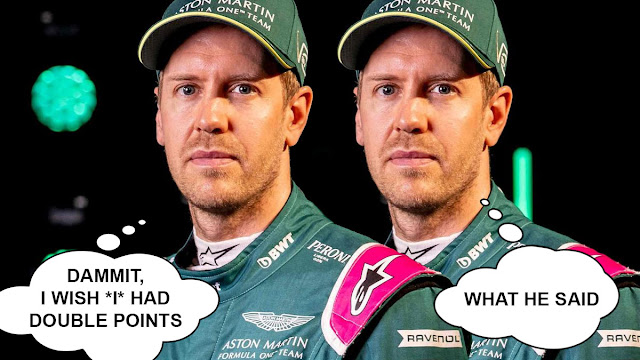 This weekend's Formula One grand prix, taking place in the gorgeous Algarve on the south coast of Portugal, is a default DRS race for the F1 Losers League.

What does this mean? Let's explain.

DRS means Double Race Scores. If a Losers Teams plays a DRS at a grand prix, all their scores for that race are doubled.

Each team gets nine DRSs to allocate to races throughout the 23-race season. This means nine opportunities for a points bonanza – or a points blow-out.

If a team scores strongly at a race, and they've applied a DRS doubling to that race, they'll shoot up the leaderboard of the F1 Losers League. Bonanza!

However, if they score poorly at a DRS-doubled race, it's a wasted opportunity. Blow me.

What's a "default" DRS, as mentioned above? Let's explain that too.

WHAT IS DEFAULT DRS?

We don't want DRSs to go unused, so every Losers Team starts the season with DRS automatically allocated to every third race, plus a couple of bonus DRS races at the end of the season. We call these "default" DRSs.

This means if you're feeling lazy and don't want to participate much in the Losers League, you'll still get your double scores at nine races in the season.

These default DRS races are labelled on our season calendar and you can also see them on your individual team page listed on the Entries page.

WHAT THIS MEANS IN PORTUGAL

As you can see, this weekend's race in Portugal is one such default DRS race. This means we'll be tootling around the Algarve with almost every Losers Team getting double points. Some will benefit massively: for others, this will be a costly mistake.

As is already happening with Portugal, some teams might choose to move their DRS allocations to other races, so different races get double points instead. In fact, Losers Teams can move any DRS to any future race in the 23-race season, and do this as much as they wish.

They can even stack up to three DRS allocations in one single race: this is a higher risk strategy that will see teams getting triple or quadruple points.

If you want to see which races have DRS allocated for your Losers Team, go to your individual team page listed here.

So then, Losers Teams, you need to ask yourself a question. Do you stick to the DRS we've automatically given to you for this weekend's grand prix in Portugual? Or do you de-allocate that DRS and move it to a different race later in the season?

If you want to, you can move a DRS allocation using the control panel on the DRS page.

As the famous Portuguese philosopher Cristiano Ronaldo once said, "I feel an endless need to learn, to improve, to evolve, not only to please the coach and the fans, but also to feel satisfied with myself. It is my conviction that here are no limits to Double Race Scores, and that it can never stop, no matter what our age."

Email ThisBlogThis!Share to TwitterShare to FacebookShare to Pinterest
Labels: drs

Fee-fi-fo-fum, we smell the winner of Formula One. Be he a Lewis, or be he a Max, you'll bet on someone else taking chequered flags!

Seriously. Can someone else win? Please?!

Bet on the title contenders Hamilton and Verstappen *not* winning at a particular race. Read on to play this Punt.

Charles is a Monégasque driver, which means he was born with a silver yacht in his mouth. Let's see if he can be crowned a loser at his home grand prix. Read on to play this Punt.
Read more »

This Pitlane Punt is now closed. The punt was:

If you were pootling around a race track in Portugal or Spain, you'd park up and head off to the beach instead, right?
Read more »

After two races, things are shaping up nicely. How did your team do at the weekend? (Have a look here.) Was your result in Italy like a lovely pizza, nice and hot, dripping with cheese? Or was it like chewing on a rusty hubcap? Mmmm. Hubcaps.

Here are some tables with (a) the F1 Losers League standings, which we're still calling the loserboard, (b) the driver standings after such a crashy grand prix, and (c) the constructor standings. Read on.

THE BIGGEST LOSERS IN IMOLA

It was a long wait, but the cars finally hit the track for the second race of the 2021 F1 season... then promptly spent a lot of time driving off the track.

The half-dry, half-rain weather conditions at the Emilia Romagna grand prix (Imola to its friends) caused mayhem for the Formula One teams. Before you carry on, have a look at the points we awarded to the drivers and constructors in Imola.

How did the Losers Teams fare? Which teams got wet feet? Which teams left their brolly on the bus? Which teams were singing in the rain? Can anyone make sense of these confused metaphors?

Let's look at who did a terrible Italian job. Read on.

Perhaps, however, the biggest story is the sinister wizardry that happened on lap one. Nikita Mazepin throws his car off the track with alarming regularity, as if possessed by some kind of aerodynamic poltergeist. On Sunday, in an impressive feat of demonic transference, he touched Nicholas Latifi's car ever-so-slightly, and it was Latifi who was propelled into the barriers. Is Latifi now possessed with the Phantasm of Mazepin? Who will the curse pass into next?

Latifi was the driver who scored the most losers points: that crash got him 10 points for a DNF plus 5 points for an Earliest Exit. And thanks to our unpredictable Beige Flag awards, it's Tsunoda who was the second biggest losing driver – more details below.

Williams topped the Losers Points for constructors in Italy: what a terrible race for them. Mercedes find themselves in second place in the Losers points, as a growing number of cross-constructor arguments cause a few twitches from our Beige Flags.