The drivers and constructor on your Losers Team earn Track Points at every race. This page explains how those Track Points work.
You can attempt to earn more Track Points by making your team members worse. You can do this by using Ejector Seats to change your drivers and constructor.
You can add to Track points with Boost Buttons, Fast Forecasts and Pitlane Punts: there are separate pages explaining these.
The League works out the maths for you, so you can simply focus on running the worst Losers Team possible. 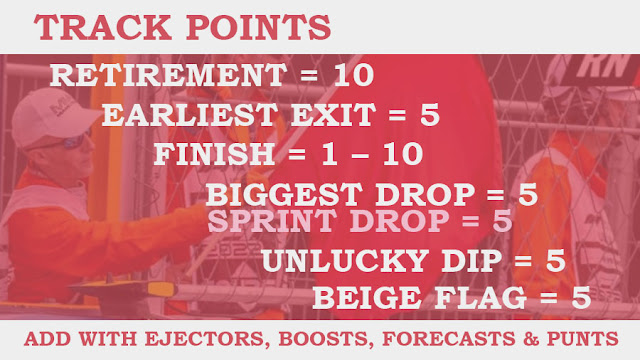 RETIREMENT = 10
EARLIEST EXIT = 5
FINISH = 1 TO 10
BIGGEST DROP = 5
SPRINT DROP = 5
UNLUCKY DIP = 5
The Unlucky Dip is a points parameter that changes every race. From this menu of 12 points elements, the League will randomly select one element to apply for each race weekend. The League will announce its choice on Twitter^ before each grand prix weekend.
This may help you make decisions for Ejectors and Boosts.
5 Track Points to the car that...
BEIGE FLAG = 5
All League decisions are final and possibly erratic. 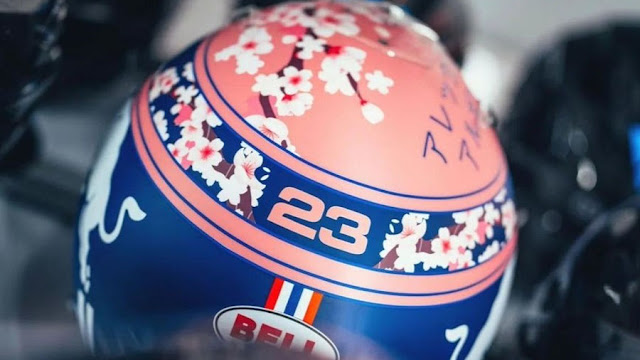 Some people loved it, but we reckon this is a bad helmet design.
A REMINDER ABOUT CONSTRUCTORS
In the real world of Formula One, constructors have two cars in a race.
This means the constructor you have picked for your Losers team will earn most of their Track Points at twice the rate of the drivers on your team. It's worth remembering this when choosing and changing your team.
AN EXAMPLE, PLEASE
Let's say you have driver Lewis Hamilton on your Losers Team. Hamilton finishes 19th. That's 9 finish Track Points for you.

Let's say you have constructor Red Bull on your Losers Team. One of their cars finishes 12th and the other one retires. That's 12 Track Points for you (2 finish Track Points plus 10 retirement Track Points).
Let's say you have Logan Sargeant on your Losers Team. He retires first in the race. Also, he's caught stealing Alex Albon's red hairspray, so the League awards him a beige flag. That's 20 Track Points for you (10 retirement Track Points plus 5 earliest exit Track Points plus 5 beige flag Track Points ).
HOW TO ADD TO YOUR RACE POINTS
If you're not scoring enough, use Ejector Seats to dump your team members in favour of a worse driver or constructor. You should do this regularly, especially as there are bonus points on offer. You can also play Boost Buttons, Fast Forecasts and Pitlane Punts. If you score really badly in a race, you'll face a compulsory Ejector Seat.
SMALL PRINT: REPLACEMENTS
If a driver or constructor is replaced, a Losers Team will continue earning points with that direct replacement. Your Team details will be adjusted accordingly.
For example, a self-isolating Sebastian Vettel was replaced at the 2022 Bahrain and Saudi Arabia grands prix by Nico Hulkenberg. Any Losers Team with Vettel in their team earned Track Points with Hulkenberg. A simple swap.
At the 2020 Sakhir grand prix, Jack Aitken replaced George Russell, while George Russell replaced Lewis Hamilton. This is more complicated. Following strict replacement rules, a Losers team with Russell in their team would now earn Track Points with Aitken, and *not* with Russell in a different car. Teams with Hamilton as a member would now earn Track Points with Russell.
If a team or driver drops out without a replacement, this is considered not finishing a race and will earn retirement Track Points.
The F1 Losers League will worry about the details. You just concentrate on being a total loser.

SMALL PRINT: IN CASE OF DISPUTE
The final authority on any race stats is formula1.com^.