The F1 Losers League is an upside-down fantasy league celebrating the blunders and backmarkers of Formula One.

No podiums here: only red flags, retirements and regrets.

HERE'S HOW TO CREATE YOUR LOSERS TEAM
To play, you need to set up the worst Losers Team you can. Your team should comprise:
We've listed the 2021 drivers and constructors here.
Your choice isn't entirely flexible: read the Entry page to learn about the Pit Garage Rule.
Once you're depressingly resigned to your choices, then enter your team into the F1 Losers League (it's free!).

HERE'S HOW YOU EARN LOSERS POINTS
Your Losers Team choices earn points for bad race performance. Look out for cars finishing outside the top ten or retiring from a race.
Alongside bad race performance, the F1 Losers League also awards Beige Flag points for specific failures, from the silly to the serious.
And finally, if a car has the audacity to win a Formula One race, the League deducts points. Lots of points.
Read all about the F1 Losers League points system.
USING THE REPAIR SHOP
Unlike Pastor Maldonado pitching his car into the barriers, it doesn't stop there.
As the season progresses, you can attempt to increase your scores by using the Repair Shop.
In the Repair Shop, you can double some points, gamble other points, sack your own team choices or self-destruct your entire Losers Team.
Visit the Repair Shop to see the options available to you. 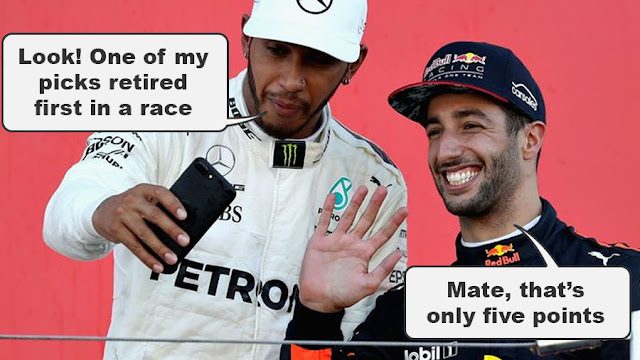 YOU DON'T HAVE TO KNOW MUCH ABOUT FORMULA ONE
The F1 Losers League is designed to appeal to everyone, even if you don't really follow Formula One.
The site will help you make choices, and will entertain you with the more colourful elements of the sport's loserdom.
With plenty of points information on hand, just follow the numbers.
F1 LOSERS CHAMPION 2021
By the end of the season, one disaster-ridden Losers Team will tower above the rest as F1 Losers Champion.
There are no prizes. Maybe you can celebrate by pouring champagne all over yourself. You'll have to buy the champagne.
Every other team that doesn't become F1 Losers Champion will have failed to become the biggest failure, which is a paradox even we haven't worked out yet.
WHO DIS?
The F1 Losers League was created and is administered by Fat Roland^, who has never won a grand prix and therefore is the ideal person to run a fantasy league dedicated to F1 flops.