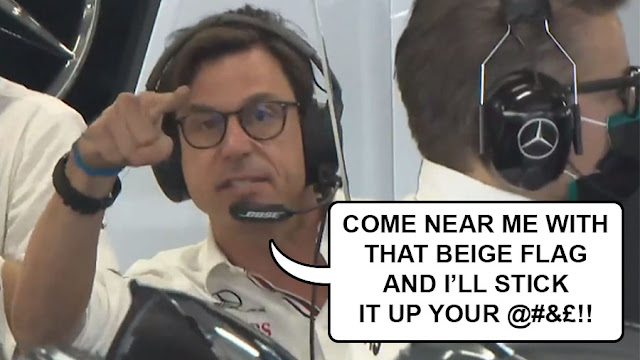 Don't mess with Mercedes' Toto Wolff. Cross him and he will point at you and then he will say a swear word. Does his Red Bull rival Christian Horner know that Toto's middle name is Christian. No, really. Look it up on Wikipedia. Oops, sorry, Toto. We'll stop talking about you. Stop pointing. STOP POINTING.

Lance Stroll's underwhelming retirement ensured that he and Aston Martin were the biggest losers at Brazil's São Paulo grand prix. It was such an unnoticeable retirement. We can't even remember the reason for his DNF. Disappointment, probably. More of note is the fact that Ricciardo and McLaren each had by far their biggest score of the season.

Plenty of Backwards Bonus points in Brazil, and of course we couldn't wait to foist a Beige Flag on Verstappen and on Mercedes for their South American shenanigans. Red Bull doesn't just give you wings: it feels them up too.

Read on for all the points in Brazil.

Beige Flag: Alfa Romeo 10 (for Raikkonen's pitlane start^ due to a rear wing change)
Beige Flag: Aston Martin 10 (for rumours that they're losing boss Otmar Szafnauer^)
Beige Flag: Mercedes 10 (for that dodgy rear wing^ that saw Hamilton chucked out of qualifying)
Beige Flag: McLaren 10 (for the whole hot mess that is the Audi takeover rumour^)

Here are the Losers Team scores for Brazil.

It's Qatar next on the F1 calendar, so expect a "while my Qatar gently weeps" pun in our next race update. On December 1st, every single unpressed Boost Button will get automatically pressed, which means we'll be going into the Saudi Arabia grand prix in December bursting with boosts.