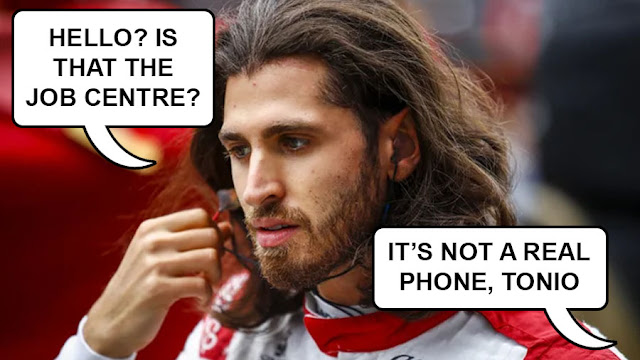 Carry on reading for all the Losers team action in Qatar.

On December 1st, every unpressed Boost Button will be pressed. 17 Losers teams haven't pressed either of their Buttons: they'll face the last two races with triple race points. Some teams have one Button left, and some have none left so may fall behind. Expect mayhem.

Because of the odds, Pitlane Punts do fail more they than succeed, but they do work out as an overall positive if you play them enough. We didn't expect EVERY punt to fail at a race. This happened in Qatar. Oh heck.

We've made a change! We're rolling the Podium of Shame into Break Assist: think of it as a joint venture like Cagney & Lacey, Whizzer & Chips or foot & mouth. From now on, the Podium of Shame will feature the three lowest-scoring Losers teams in terms of pure race points (points earned from drivers and constructors), but this time, crucially, ignoring Boosts, Forecasts and Punts. Those three 'Shamed' teams will be subject to Break Assist, with the lowest scorer getting an Ejector Seat triggered. Not a big change, but a fairer one. So...

Remember when the television series Lost lost its way and everyone was disappointed? The following teams are the fantasy league equivalent of Lost, meandering down narrative dead ends just like that episode in which we discovered Dooley McGuffin was the ghost of the crashed airplane's pilot pet wombat all along. Did that happen in Lost? No idea, we've never watched it.

Here are the Race points for Qatar.

Brace the mainsails! Batten down the hatches! Glue the dog to the sofa! Things are about to descend into chaos. On December 1st, every remaining unpressed Boost Button will be automatically pressed. That means 17 teams running with triple race points at the Saudi Arabia and Abu Dhabi grands prix in December, with a further 7 teams playing at least one Boost Button at either or both races. The final showdown is here.