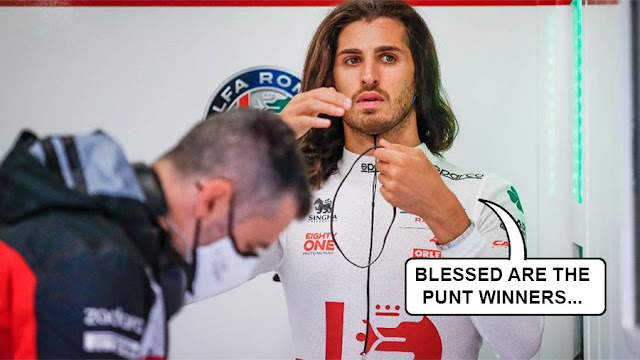 Such drama! Such action! So many thrills and spills! No, not the Dutch grand prix, which essentially involved everyone not overtaking home hero Max Verstappen should they be besieged by legions of orange-clad Max fans. We mean the Losers Team scores. Amazing!

A minor prang for Giovinazzi on the opening lap not only cost him aero ability, it also meant a pay-out for the Romeo Oh Romeo Pitlane Punt (bet that an Alfa Romeo car will hit something) and a successful Fast Forecast for the one team that bet he would lose position on the opening lap.

Such a small incident, but with consequences that would define the Losers results in the Netherlands. A bit like Jesus feeding the five thousand, but with Losers Points instead of fish. Come to think of it, we've never seen Jesus and Giovinazzi in the same place at the same time. Iiiinteresting...

Incidentally, there was no Raikkonen in this race. For the Netherlands, and for the next race in Italy, it will be Kubica scoring points for that car instead.

Read on for the Losers Teams scores for the Netherlands grand prix.

BIGGEST LOSERS IN THE NETHERLANDS

Get those orange flares at the ready, or any colour trouser. Here are the highest scoring Losers Teams at the Dutch grand prix.

TEAM ACTIONS IN THE NETHERLANDS

Which teams tried to ignite their orange flares, only for it to explode in their faces? Here are the lowest scoring teams in the Netherlands this week. Shame on you all. SHAME ON YOU ALL.

Here are the Race points for the Netherlands.

We go marching to Monza this coming weekend, where we'll see a new points element for worst Sprint result. This weekend, we will also freeze team actions for the DRS system, which will be replaced by Boost Buttons later this month. And then on September 15th, we'll launch a fourth Ejector Seat.