Double the fun: DRS is being replaced by Boost Buttons 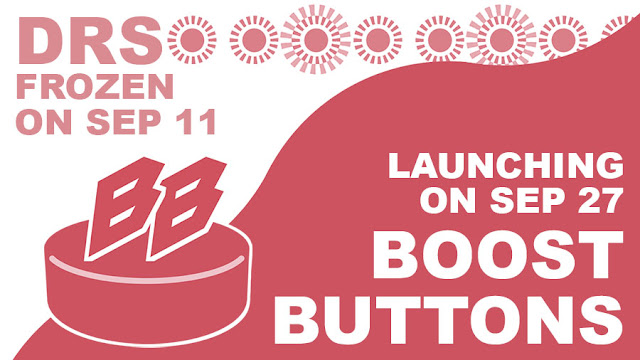 The F1 Losers League is ditching the DRS (Double Race Scores) system. We're throwing it out, and not even using the recyling bins. Off to landfill for DRS.

This month, we will replace DRS with Boost Buttons. Press a Boost Button and immediately start scoring double points. One press. Bang. That's it.

We'll explain more about Boost Buttons in a moment. The problem with DRS was it relied on F1 jargon, with the wider meaning of "DRS" only being known by people well into F1. We want the League to be accessible to more people than that. A Boost Button is a more understandable concept. Everyone loves pressing buttons.

DRS also involved calendar homework, which was a faff. Pitlane Punts, which are definitely here to stay, are enough of a mind melt without us adding to that.

Here's what will happen. Tomorrow, the DRS system will freeze. There is one more default DRS race in Russia, and a couple of teams are playing DRS for Monza this weekend, but that's it. No more changes to DRS.

On September 27, each Losers Team will be given two Boost Buttons. They can be pressed at any point until the end of the season. The Buttons will appear on your personal team page.

Press a Boost Button and double your race scores for the next TWO races. You can even press both at once, tripling your next two race scores.

We should point out that Boost doubling applies only to race points picked up by Losers Teams, and not to points gained or lost from team actions such as Punts. Also, if you can't be bothered to press your Boost Buttons, or you're busy with other things such as watching paint dry or pulling the legs off spiders, fear not. All unpressed Buttons will be automatically pressed on 1 Dec, giving us lots of multiple scores for the last two races of the season.

There you have it. A big change for the F1 Losers League, but a good one. The boostiest buttons since Jenson!