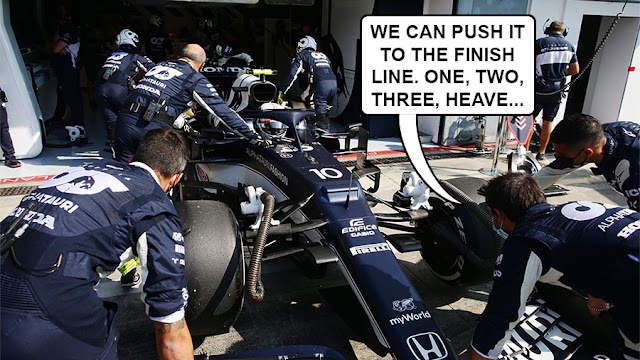 Daniel Ricciardo won in Italy. He's nicknamed the honey badger because he, er , has a sweet tooth and likes rutting in people's back gardens. Meanwhile, Hamilton and Verstappen were humping each other like rabbits. For the F1 Losers League, this is all irrelevant. There was one massive loser in Italy and that was the sad panda that was AlphaTauri.

What a woeful weekend for the Red Bull b-team. The 2020 Italian grand prix winner Pierre Gasly crashed out of the sprint session after hitting Ricciardo, winning him the inaugural 5-point Sprint Fail (see our points system here). He was then delegated to the pitlane for the start, and then exited the race on lap three with suspension failure.

Meanwhile Yuki Tsunoda, subject of a very special Pitlane Punt, crashed in the sprint session and was then wheeled away from the grid at the start of the race because of a brake issue. He didn't even get off the line.

All this at AlphaTauri's home race. Their score of 45 points is higher than any constructor all season.

Read on for all the race point drama in the Italian grand prix.

Earliest Exit:
Gasly 5 | Tsuonoda 5 (Tsunoda didn't even make the start of the race, but we don't want to deny Gasly points for retiring first once the race got underway)

Beige Flags:
Leclerc 10 (for feeling unwell, and we reckon from his response^ it's something to do with going to the toilet too much)
Tsunoda 10 (for his foot-in-mouth moment for saying it was a surprise^ to keep his seat)
Verstappen 10 (for getting the blame^ for *that* crash)

Beige Flags:
AlphaTauri 10 (for the gearbox change^ that forced Gasly into a pitlane start)
Mercedes 10 (for the power unit switch^ that demoted Bottas to the back of the grid)

Here are the Losers Team scores for Italy.

On September 15th, every Losers team gets another Ejector Seat – get changing your team members! The next race is in Russia on September 26th: it's the last ever DRS (Double Race Scores) race. Straight after that grand prix, we launch the DRS replacement Boost Buttons, which is possibly the most exciting thing to happen in the 2021 F1 season.