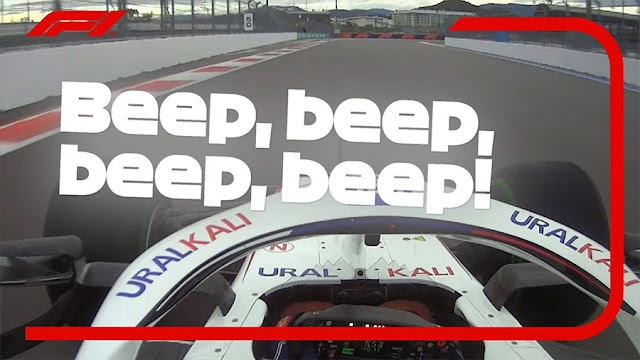 Yes, this is a graphic of Mick Schumacher saying "beep beep" while driving a car. Nothing to do with the upcoming commentary. We just wanted to include it.

Russia was the final default-DRS race of the season. Unless your team moved your DRS to an earlier race (looking at you HAASN'T A CHANCE and Panda Pops), all of your points were doubled in Russia.

One team was forced into playing a Pitlane Punt at the last race because of our super irritating tool called Break Assist. Guess what. It paid off handsomely. They won a tonne of points, doubled because of DRS, and sailed into the Sochi sunset, bottle of celebratory Russian vodka in hand.

Not actual vodka. We don't give out prizes at the F1 Losers League. We give out disappointment and bathos. But not prizes.

Carry on reading to see how Losers teams scored at the Russian grand prix.

There are some terrible things in this world. Marmite. Tea without milk. Love Actually. But nothing is more terrible than a Losers team that forgets how to lose. These are the worst performing teams in Russia.

Break Assist exists to "help" Losers teams that don't score enough points. And by "help", we mean poke with a burning stick.

LOSERS TEAM SCORES IN RUSSIA
Note: Error corrected in scores for It's a Trap Lando!, moving them from joint 3rd to 2nd in Russia

Here are the Race points for Russia.

We next go losing in Turkey on October 10th (season calendar here). With the Lucky Spanner now live and Boost Buttons in place, there's one last big League action for this season– the release of every team's fifth Ejector Seat on October 13th. And to spice up the closing races of the season, we'll release more Pitlane Punts soon.