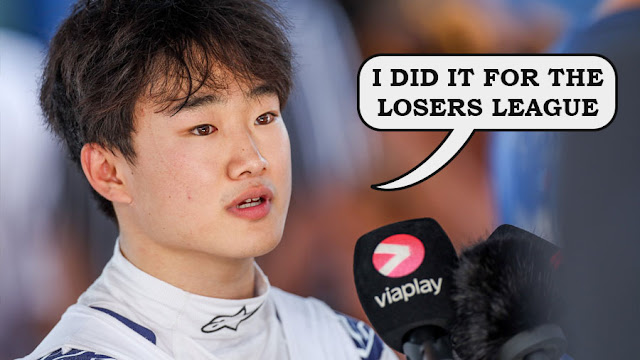 This is the commentary page for the French grand prix, featuring highlights of the Losers team action. For this race's full Losers team data featuring everyone's scores, see the data page.

This commentary page shows just the Losers team highlights for the French grand prix. For the full Losers scores, see the data page.

In the scores for each race, we highlight the Losers teams that scored the least number of Track Points. They will all be forced to parade through the streets with a sign around their neck which says "I disrespected the Losers League". And once that's done, they will play the following automatic team actions.
Teams featured in this Podium of Shame will have any resulting points losses waived. We will be in touch with more detail on your automatic team actions.

If you Eject team members and at the next race, you earn more Track Points than the previous pre-Ejected race, you get a 5-point Ejector bribe.
Don't tolerate drivers and constructors giving you too few points. Such an insult. Get rid of them: use an Ejector Seat now.

Here are the teams that played Boost Buttons in France, some with more success than others. Let's break it down.
Feeling boosty? Boost for the next two races now.
FAST FORECASTS IN FRANCE
It's 20 points for a perfect Fast Forecast prediction, 5 points if it's close (within two places for the grid and race predictions, or dropping at least one place on the opening lap), and minus-5 for any other guess. We now give a 'bribe' of 5 extra points to any team that makes two perfect or close guesses.

How many times have you won the lottery recently? What? Not at all. You're rubbish. Enter a Fast Forecast prediction instead.

Here are the driver and constructor Track Points in France.

Here is the complete Losers team data for France.

We have two new Pitlane Punts for you to play. The Flexi Floor Flutter and the Oh No Ocon. Meanwhile, there are now plenty of bribe points to be picked up with Fast Forecasts.

Very quickly, we'll find ourselves at the Hungarian grand prix (see the calendar here) and then in a long summer break. We'll come up with new Punts during the summer break, and start to introduce bribe points.

Meanwhile, the season is disappearing faster than Lord Lucan playing hide and seek. Fix up your ailing team: eject your team members now.