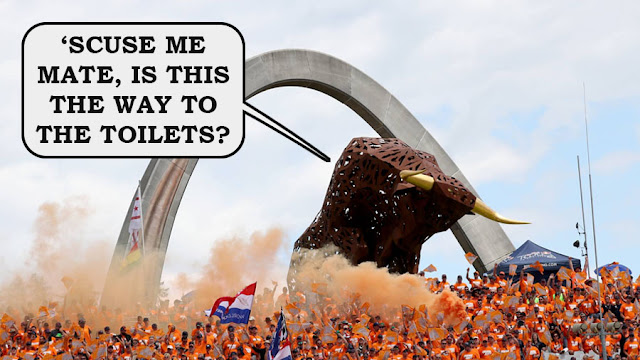 This is the commentary page for the Austrian grand prix, featuring highlights of the Losers team action. For this race's full Losers team data featuring everyone's scores, see the data page.

This commentary page shows just the Losers team highlights for the Austrian grand prix. For the full Losers scores, see the data page.

In the scores for each race, we highlight the Losers teams that scored the least number of Track Points. We will make them play automatic team actions, and also be forced to listen to every Coldplay album except the two slightly good ones (the one with Yellow on and the one produced by Jon Hopkins).
Teams featured in this Podium of Shame will have any resulting points losses waived. We will be in touch with more detail on your automatic team actions.

If you Eject team members and at the next race, you earn more Track Points than the previous pre-Ejected race, you get a 5-point Ejector bribe.
Eject. Verb. To throw something out in a rapid way. Example in a sentence: the F1 Losers League ejected a furious Nicholas Latifi from their bathroom. Use an Ejector Seat now.

Here are the teams that played Boost Buttons in Austria, some with more success than others. Let's break it down.
Boost for the next two races now.
FAST FORECASTS IN AUSTRIA
Remember: it's 20 points for a perfect Fast Forecast prediction, 5 points if it's close (within two places for the grid and race predictions, or dropping at least one place on the opening lap), and minus-5 for any other guess. We now give a 'bribe' of 5 extra points to any team that makes two perfect or close guesses.

Have a flutter on a Fast Forecast. Make a prediction for the next race now.

PITLANE PUNTS IN AUSTRIA
What would you rather experience? A robot Lorraine Kelly lasering everyone you love to burning smithereens? Or an exciting Pitlane Punt in the F1 Losers League?

Here are the driver and constructor Track Points in Austria.

Here is the complete Losers team data for Austria.

The next two races are France on July 24th and Hungary on July 31st, after which it's the summer break. We will start to introduce bribe points for Pitlane Punts after that break, so expect more points and bigger wins.

We have introduced extra bribe points for Fast Forecasts. Let's see how this goes for the next few races. If you want to get in the Fast Forecast action, go here.

Six teams are carrying Boost Buttons into the next race in France. Expect a shake-up in the standings.

Over 80 Ejector Seats have been triggered so far this season, which sounds a lot but is probably not that much. In fact, across the whole League, 75% of Ejector Seats are yet to be used even though it's the best way of scoring more points in the F1 Losers League. Eject your team members now!