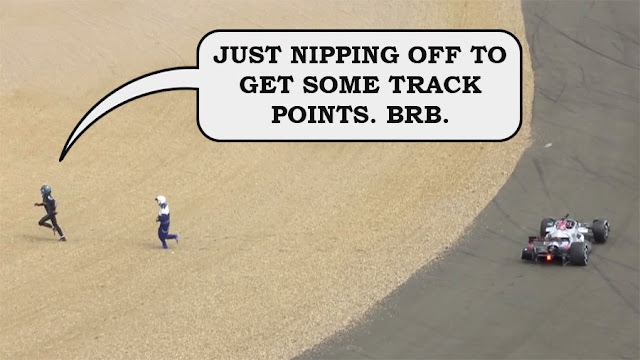 This is the commentary page for the British grand prix, featuring highlights of the Losers team action. For this race's full Losers team data featuring everyone's scores, see the data page.

This commentary page shows just the Losers team highlights for the British grand prix. For the full Losers scores, see the data page.

In the scores for each race, we highlight the Losers teams that scored the least number of Track Points. As well as making them play automatic team actions, we also make voodoo dolls out of them using blue-tac, sellotape and ear wax.
Teams featured in this Podium of Shame will have any resulting points losses waived. We will be in touch with more detail on your automatic team actions.

If you Eject team members and at the next race, you earn more Track Points than the previous pre-Ejected race, you get a 5-point Ejector bribe.
Ejecting your team members is the easiest way to rise up the ranks in the F1 Losers League. Use an Ejector Seat now.

Here are the teams that played Boost Buttons in Britain, some with more success than others. Let's break it down.
Can you do better than this lot? Boost for the next two races now.
FAST FORECASTS IN BRITAIN
Remember: it's 20 points for a perfect Fast Forecast prediction, 5 points if it's close (within two places for the grid and race predictions, or dropping at least one place on the opening lap), and minus-5 for any other guess.

Starting in Austria, the 5-point Forecast bribe changes. It will be given if you predict two perfect OR close Forecasts in any one race.

Can YOU guess three perfect Fast Forecasts? No, no you can't. Don't even try. Nope. No chance. Make a prediction for the next race now.
PITLANE PUNTS IN BRITAIN
Want to look like a bulldog chewing a vegan sausage roll? Then sit on your bum ignoring your Losers team. Alternatively, become top dog by gambling your points on a Pitlane Punt.

Here are the driver and constructor Track Points in Britain.

Here is the complete Losers team data for Britain.

We go straight into the Austrian grand prix this weekend, where everyone will bang on about Red Bull while guzzling Red Bull. In fact, it's a busy couple of months: see the season calendar.

We have changed the odds on the Wildlife Wager, the Williams You Are Really Nothing Punt and the Top of the Crop Stop Punt. All three are paying off more than we expected, so expect reduced odds and slightly smaller pay-outs. See all playable punts here.

At the moment, you get a 5-point Fast Forecast bribe if you predict two exactly correct Forecasts in a race. Turns out this has been difficult to achieve. So this rule changes from the next race in Austria. From then on, to get that extra 5 points, you just have to predict two correct OR almost-correct Forecasts in any one race. So you could easily get your Forecasts wrong, but as long as you're almost-correct with two of them, you get 5 extra points! Forecasts are still limited to three per race.