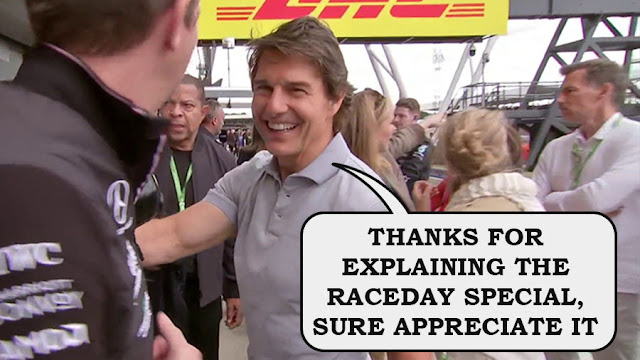 The British grand prix was almost immediately red flagged when Alex Albon, George Russell and Zhou Guanyu's races were cut short, the latter skimming upside-down over the tyre barrier. We can only imagine Tom Cruise watching from the VIP area getting ideas for his next blockbuster stunt. The unfortunate trio all share earliest exit Track Points and the accolade of biggest losers in Silverstone.

Our raceday special Track Points pivot every two months. In May and June, the points went to the car with the longest pitstop. For July and August, they're awarded to the car that finishes the most number of places behind a teammate. Step forward, Daniel Ricciardo and McLaren.

For the constructors, Alfa Romeo had a double retirement and score by far their highest Track Points of the season. Zhou had that dramatic off at the start, while Bottas's gearbox let go later in the race. They weren't the highest-scoring constructor, though. Williams take that honour thanks to some beige flag-worthy news we've only just discovered. No loserdom remains hidden here at the F1 Losers League.

Read on for all the Track Points in Britain.

No Beige Flags for drivers in Britain

Here is the Losers team commentary for Britain.

Here is the complete Losers team data for Britain.

We go straight into the Austrian grand prix this weekend, where everyone will bang on about Red Bull while guzzling Red Bull. In fact, it's a busy couple of months: see the season calendar.

We have changed the odds on the Wildlife Wager, the Williams You Are Really Nothing Punt and the Top of the Crop Stop Punt. All three are paying off more than we expected, so expect reduced odds and slightly smaller pay-outs. See all playable punts here.

At the moment, you get a 5-point Fast Forecast bribe if you predict two exactly correct Forecasts in a race. Turns out this has been difficult to achieve. So this rule changes from the next race in Austria. From then on, to get that extra 5 points, you just have to predict two correct OR almost-correct Forecasts in any one race. So you could easily get your Forecasts wrong, but as long as you're almost-correct with two of them, you get 5 extra points! Forecasts are still limited to three per race.