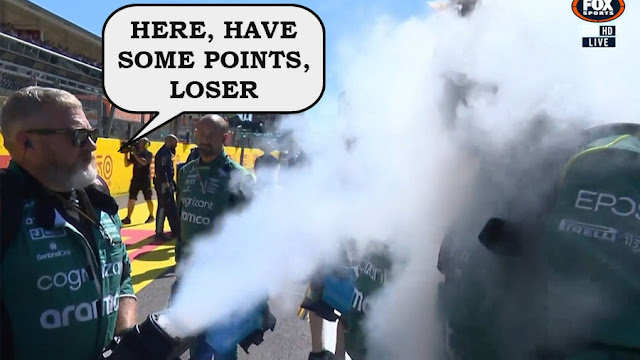 Read on for the commentary page for the Monza grand prix, featuring highlights of the Losers team action. For this race's full Losers team data featuring everyone's scores, see the data page.

This commentary page shows just the Losers team highlights for the Monza grand prix. For the full Losers scores, see the data page.

In the scores for each race, we highlight the Losers teams that scored the least number of Track Points. Look at them kicking over sandcastles on the beach and blowing raspberries at puppies. Terrible behaviour. Let's shame them with automatic team actions.

If you Eject team members and at the next race, you earn more Track Points than the previous pre-Ejected race, you get a 5-point Ejector bribe.
If you take one team action, go for an Ejector Seat. Identify your lowest scoring team member and dump 'em. Launch an Ejector Seat now.

Here are the teams that played Boost Buttons in Monza. As ever, we've split them into three streams so you can see who scored an advantage from boosting. Some placed boosts themselves and some were automatically booosted.
We were going to come up with a clever car metaphor for this line. But then we realised we know absolutely nothing about cars. What are cars? How do they work? Nobody knows. Push a Boost Button now.
FAST FORECASTS IN MONZA
It's 20 points for a perfect Fast Forecast prediction, 5 points if it's close (within two places for the grid and race predictions, or dropping at least one place on the opening lap), and minus-5 for any other guess. We now give a 'bribe' of 5 extra points to any team that makes two perfect or close guesses.

The best way to correctly predict a Fast Forecast is to adopt an octopus called Paul and wire it up to a lie detector test. Once you have done this (there should be plenty at the local zoo), submit a Fast Forecast for the next race.

PITLANE PUNTS IN MONZA
The four teams vying for the 2022 F1 Losers championship all scored exactly 49 points with Punts in Monza, namely Nikita Putin, Strolling the ranks, Vladimir Mazepin and What Verstappened.
We've launched a new punt called the Suzuka Bazooka. Give it a gamble, or play any other Pitlane Punt now.

Here are the driver and constructor Track Points in Monza.

Here is the complete Losers team data for Monza.

We've got a lovely break for a few weeks. You can spend more time on your hobbies. Embroidery, pottery, shoplifting. The next grand prix is in Singapore on 2nd October. See this year's 2022 F1 schedule.

A credit of 13 points will appear on every team page on Sunday 18th September, a day we're calling Losers Loan Sunday. You can use these points on a number of things: not losing points on Forecasts or Punts, gaining a few extra Track Points, or buying an Ejector Seat. If you don't use your 13 points, they will vanish at the end of the month. Read all about Losers Loan Sunday.

We've had a tonne of automatic Boost Buttons in the last couple of races. Things will calm down for the next few grands prix. And then, at the start of November, we will automatically press every unused Boost Button. This will lead to double-points mayhem in the last two races of the season. If you want to get ahead of the game and double your Track Points earlier than that, press a Boost Button now.

You can earn quite a few points from Fast Forecasts if you play your cards right. Place a Forecast for Singapore.