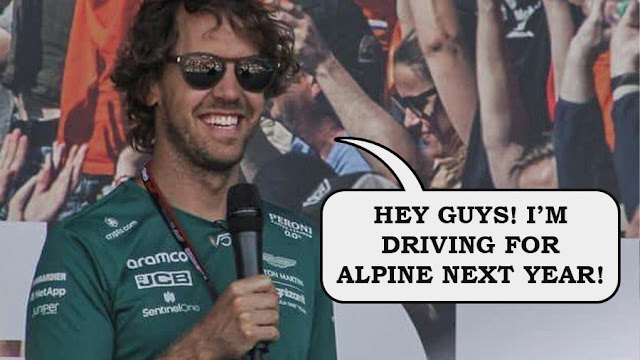 This is the commentary page for the Hungarian grand prix, featuring highlights of the Losers team action. For this race's full Losers team data featuring everyone's scores, see the data page.

This commentary page shows just the Losers team highlights for the Hungarian grand prix. For the full Losers scores, see the data page.

In the scores for each race, we highlight the Losers teams that scored the least number of Track Points. Rather than make them wear a face tattoo saying "I disappointed the Losers League", we will make them do something much more permanent: they'll be forced to take out the following automatic team actions.

If you Eject team members and at the next race, you earn more Track Points than the previous pre-Ejected race, you get a 5-point Ejector bribe.
August is the so-called silly season in which F1 teams dump their drivers. Do the same. Trigger an Ejector Seat now.

Here are the teams that played Boost Buttons in Hungary. Each race, we split them into three levels.
Strap on that jet pack of multiplication. Boost for the next two races now.
FAST FORECASTS IN HUNGARY
It's 20 points for a perfect Fast Forecast prediction, 5 points if it's close (within two places for the grid and race predictions, or dropping at least one place on the opening lap), and minus-5 for any other guess. We now give a 'bribe' of 5 extra points to any team that makes two perfect or close guesses.

Try your hand at predicting what will happen at the next race. Make a Fast Forecast now.

Here are the driver and constructor Track Points in Hungary.

Here is the complete Losers team data for Hungary.

We're now in the summer break in which all the F1 teams have to down tools and twiddle their thumbs until the next grand prix, which is in Belgium on August 28th. Have a look at the 2022 calendar.

We don't like to rest on our laurels or on our haunches or any other words we don't quite understand. Throughout August, we will release new Pitlane Punts: a nice refresh to get you addicted to gambling just in time for autumn.

We're likely to run a Fast Forecasts freebie day later in August. This means there will be a 24-hour period during which you can place a Forecast with zero points liability. We'll announce this some time in the middle of the month.

We have no automatic Boost Buttons lined up for Belgium, other than the Boosts currently running. The Netherlands a week later will be quite different, with 11 teams due to have their Buttons automatically pressed. Beat the Boost bots by bashing a Button now.