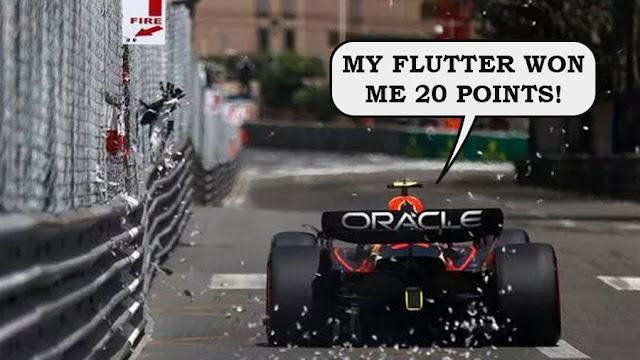 This is the commentary page for the Monaco grand prix, featuring highlights of the Losers team action. For this race's full Losers team data featuring everyone's scores, see the data page.

This commentary page shows just the Losers team highlights for the Monaco grand prix. For the full Losers scores, see the data page.

In the scores for each race, we highlight the Losers teams that scored the least number of Track Points. They failed to fail, much to our disgust. Each of these teams is banned from any Royal jubilee celebrations; they will have their balloons popped and their bunting recycled into knicker elastic. They'll also be forced to take the following team actions:
Teams featured in this Podium of Shame will have any resulting points losses waived. We will be in touch with more detail on your automatic team actions.

Every Losers team listed here improved their race-on-race Track Points score, earning them a 5-point Ejector bribe. Apart from one team. Eight heroes, one zero...
Want to Ejector in time for the Azerbaijan grand prix? Use an Ejector Seat now.

Loads of teams faced automatic Boost Buttons in Monaco. Double Track Points whether they liked it or not. Because this kind of reporting can get kinda dull, if a team was automatically Boosted, we're going to nickname them with a fruit or vegetable.
Want to carry on the Boost bonanza? Double your Track Points for Azerbaijan and Canada here: Boost for the next two races now.
FAST FORECASTS IN MONACO
Remember: it's 20 points for an exactly correct Fast Forecast, 5 points if it's almost correct, and minus-5 if it's very wrong.
Will the next grand prix start million hours late? Will the Canadians keep it on the track? Will Albon's hair still be red? Who knows. Make a Fast Forecast prediction for the next race now.
PITLANE PUNTS IN MONACO
Want to add your team to this collection of gambling reprobates? See the full list of playable Pitlane Punts.

Here are the driver and constructor Track Points in Monaco.

Here is the complete Losers team data for Monaco.

The next races on the calendar are Azerbaijan on 12 June and Canada on 19 June. At last year's Azeri grand prix, a tyre disaster ruined Lance Stroll's race and sent him to the top of the driver points, while Mercedes claimed the most constructor points. Fancy a prediction for 2022? Place a Fast Forecast now.

Expect more automatic Boost Buttons for teams that have been lazy with their boosting. In the meantime, with almost a third of the season behind us, you might want to dump your pointless drivers with an Ejector Seat. The sooner you Eject, the more points you could earn. Yank that lever of loserdom now!

Finally, it's time for some bookmaker housekeeping. We're going to review the odds on our Pitlane Punts. Some odds and stakes may change, and one or two Punts may be withdrawn. Worth getting in a flutter before we broom out the cobwebs?