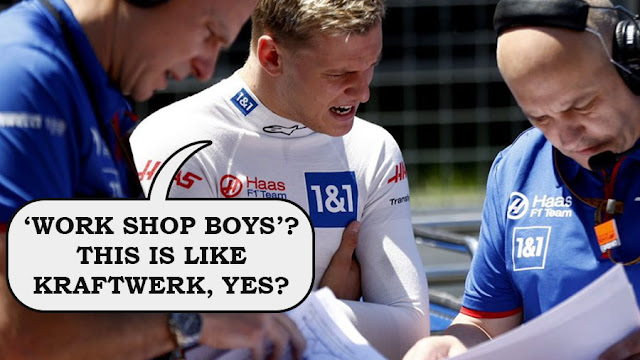 This is the commentary page for the Canadian grand prix, featuring highlights of the Losers team action. For this race's full Losers team data featuring everyone's scores, see the data page.

Only one of these seven top-Track Pointing teams played a Boost Button. A missed opportunity? Press your Boost Button now.
This commentary page shows just the Losers team highlights for the Canadian grand prix. For the full Losers scores, see the data page.

In the scores for each race, we highlight the Losers teams that scored the least number of Track Points. These teams think they're so clever, winning instead of losing, thriving instead of failing. Who do they think they are? Let's ruin their lives with some automatic team actions:
Teams featured in this Podium of Shame will have any resulting points losses waived. We will be in touch with more detail on your automatic team actions.

If you Ejector your team and you earn more points than in the previous pre-Ejected race, you get a 5-point Ejector bribe.
Tune up (or is it down?) your team by changing its members. Use an Ejector Seat now.

Here are the teams that played Boost Buttons in Canada, some with more success than others. Let's break it down.
Want to be a Rebel MC and opt for some Double Trouble? It's an old music reference: ask your great grandmother. Boost for the next two races now.
FAST FORECASTS IN CANADA
Remember: it's 20 points for an exactly correct Fast Forecast, 5 points if it's almost correct, and minus-5 if it's very wrong.
Want to turn a Fast Forecast into a Fast Phwoar-cast? Make a prediction for the next race now.
PITLANE PUNTS IN CANADA
You can play a Pitlane Punt by walking into a Betfred's and trying to explain the F1 Losers League to an unsuspecting member of staff before getting thrown out by security. Or you take the easier option and visit all of the Pitlane Punts here.

Here are the driver and constructor Track Points in Canada.

Here is the complete Losers team data for Canada.

There are four races in July, starting with the British grand prix on 3rd July. Expect all that jubilee bunting to get dragged out of the bottom cupboard again. Following Silverstone, there's a two-month run of races in Europe: have a look at the season calendar.

On 1st July, were going to implement a change to Fast Forecasts. Not enough of you are earning Forecast bonuses, so we want to change that.

We're 40% of the way through the season, which means you should have Boosted at least two times and Ejected at least four times. Take a look at your progress on your personal team page, then submit a team action or two. You can even DM us on Twitter^ because we're cutting edge.