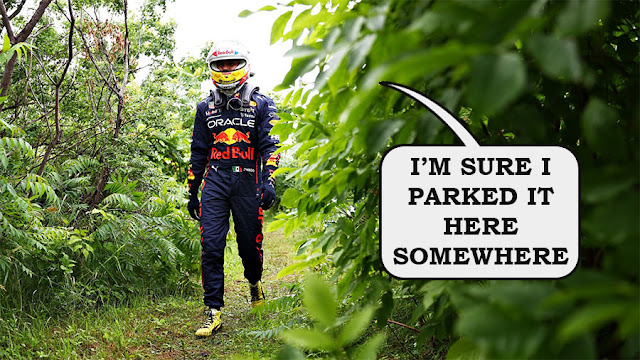 Sergio Perez conked out pretty quickly during F1's return to Canada. To add insult to injury, he was made to walk back to the pits along some kind of shrub-strewn gully, like he was foraging for twigs or something. His earliest exit ensures he is the top-scoring driver alongside homeboy Nicholas Latifi, whose career path looks bumpier than Hamilton's shuddering helmet.

Haas were by far the worst constructor in Canada. It was if they were playing a game of pontoon and they dealt the perfect 21: a picture card – last place – and an Ace – retirement. That last place ensures Magnussen / Haas earns the biggest drop Track Points.

Meanwhile, McLaren made a dogs dinner of a double-stacked pitstop, ensuring Norris / McLaren scooped the raceday special Track Points for spending over 43 seconds in the pitlane. This is the last time the raceday special is earned for pit time: for July and August, it pivots to the race-finishing car that finishes the most number of places behind their teammate.

Read on for all the Track Points in Canada.

Beige Flag: Hamilton 10  |  Turns out he's getting headaches^ from his bouncy car
Beige Flag: Latifi 10  |  Rumours about about being replaced by Oscar Piastri^

Here is the Losers team commentary for Canada.

Here is the complete Losers team data for Canada.

There are four races in July, starting with the British grand prix on 3rd July. Expect all that jubilee bunting to get dragged out of the bottom cupboard again. Following Silverstone, there's a two-month run of races in Europe: have a look at the season calendar.

On 1st July, were going to implement a change to Fast Forecasts. Not enough of you are earning Forecast bonuses, so we want to change that.

We're 40% of the way through the season, which means you should have Boosted at least two times and Ejected at least four times. Take a look at your progress on your personal team page, then submit a team action or two. You can even DM us on Twitter^ because we're cutting edge.