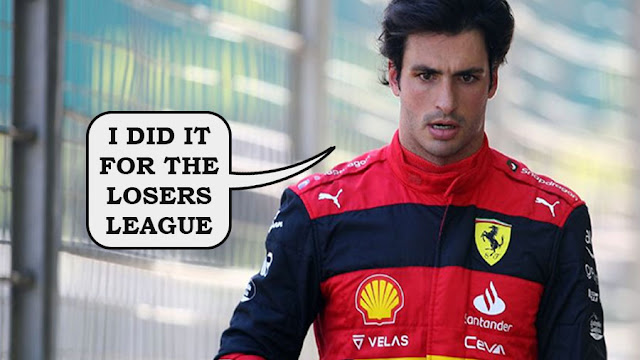 No teams really gained from Ferrari woes because Ferrari aren't on anyone's Losers team. Dammit.
This is the commentary page for the Azerbaijan grand prix, featuring highlights of the Losers team action. For this race's full Losers team data featuring everyone's scores, see the data page.

This commentary page shows just the Losers team highlights for the Azerbaijan grand prix. For the full Losers scores, see the data page.

In the scores for each race, we highlight the Losers teams that scored the least number of Track Points. We also write their names down in a big red book, and then we frown at that book in candlelight and mutter strange incantations until shadows rise and all darkness prevails. We also phone them up and call them a dick. Only joking, we just make them carry out automatic team actions:
Teams featured in this Podium of Shame will have any resulting points losses waived. We will be in touch with more detail on your automatic team actions.

If you Ejector your team and you earn more points than in the previous pre-Ejected race, you get a 5-point Ejector bribe. Every little helps.
Make your team worse. It's what the Losers League is all about. Use an Ejector Seat now.

Loads of teams faced automatic Boost Buttons in Monaco. Double Track Points whether they liked it or not. Because this kind of reporting can get kinda dull, if a team was automatically Boosted, we're going to nickname them with a fruit or vegetable.
Want to boost yerself? Boost for the next two races now.
FAST FORECASTS IN AZERBAIJAN
Remember: it's 20 points for an exactly correct Fast Forecast, 5 points if it's almost correct, and minus-5 if it's very wrong.
Do you dare take on the fearsome Forecasts? Make a Fast Forecast prediction for the next race now.
PITLANE PUNTS IN AZERBAIJAN
Remember, gambling is for all year, not just for Christmas. See the full list of playable Pitlane Punts.

Here are the driver and constructor Track Points in Azerbaijan.

Here is the complete Losers team data for Azerbaijan.

We're off to Canada this weekend. See the full season calendar.

After that, we're going to tweak the Fast Forecasts. Not sure how yet, but they need to be paying out more points. In the meantime, keep your crystal ball nice and polished and place a Fast Forecast now.

From July 1st, the Raceday Special Track Points element pivots once again. At the moment, it awards 5 points for the slowest pit time. For races in July and August, it will award 5 points to the race-finishing car that finishes the most number of places behind their teammate.

Hey. You. Get Boosting. Get Ejecting. Or get Punting. The Losers League staggers on.