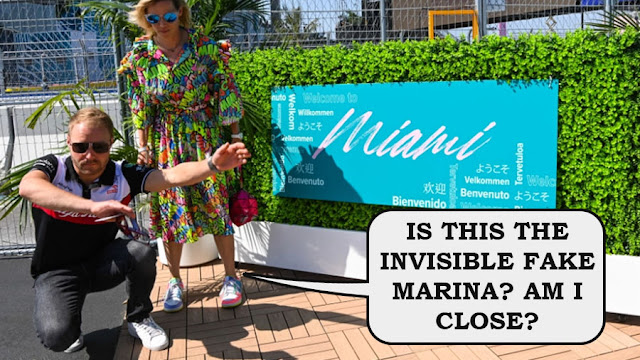 This is the commentary page for the Miami grand prix, featuring highlights of the Losers team action. For this race's full Losers team data featuring everyone's scores, see the data page.

This commentary page shows just the Losers team highlights for the Miami grand prix. For the full Losers scores, see the data page.

At every race, we draw your attention to the Losers teams that scored the fewest Track Points. Each one of these teams is dead to us. We're leaving their messages on read. We're ghosting them. We're cutting them out of our photograph albums and weeping silently at what could have been. More importantly, we're forcing these chumps to play some compulsory team actions for the next race in Spain.
Teams featured in this Podium of Shame will have any resulting points losses waived. We will be in touch with more detail on your automatic team actions.

Every team that used an Ejector Seat in Miami improved their points position race-on-race. So therefore they all get a 5-point Ejector bribe. We're so excited about this, we might put some hundreds and thousands on our breakfast gruel this morning.
The most sacked driver this time round was Yuki Tsunoda. Want to ruin some drivers' careers and score more Track Points as a result? Use an Ejector Seat now.

Seven Losers teams ran Boost Buttons in Florida. Some Boosted well. Some didn't. Let's see how it all shook down.
If your team goes half-a-dozen races without any Boost Button activity, we'll automatically press one of your Buttons. For most of you, this will happen in Monaco later in May. Get ahead of the game: Boost for the next race now.
FAST FORECASTS IN MIAMI
Remember: it's 20 points for an exactly correct Fast Forecast, 5 points if it's almost correct, and minus-5 if it's very wrong.
On Mayday, we offered loss-free predictions in the form of our Flash Fast Forecast Freebie. Make a guess, and lose no points if you got it wrong. What an offer! We received over 40 freebie Forecasts, with just a handful sent on other dates and therefore subject to the minus-5 for incorrect guesses.
The League is absolutely delighted to have given everyone a freebie.
Is kismet your middle name? Make a Fast Forecast prediction for the next race now.
PITLANE PUNTS IN MIAMI
133 points gained by Losers teams punting in Miami, and 44 points lost. We didn't get around to a new Punt between races last week, but we'll fix that soon. See the full list of playable Pitlane Punts.

Here are the driver and constructor Track Points in Miami.

Here is the complete Losers team data for Miami.

We had 98 team actions in Miami. Amazing. Things will no doubt calm down for the Spanish and Monaco grands prix, on May 22 and 29. (See the 2022 F1 calendar.) Both often aren't terribly exciting races, with Barcelona being a familiar testing ground, and Monaco with all the inflexibility of a Scalextric set. However, maybe a level of predictability would be good for playing Pitlane Punts and Fast Forecasts.

Some Losers teams are less engaged in the League than others. That's okay: people have busy lives. If you have neglected to do anything with your team this year, we will be in touch to suggest some team actions you could take. Most likely Ejector Seats.

And watch out for a bonanza of Boost Buttons in Monaco as a load of neglected Buttons get automatically pressed by the League.