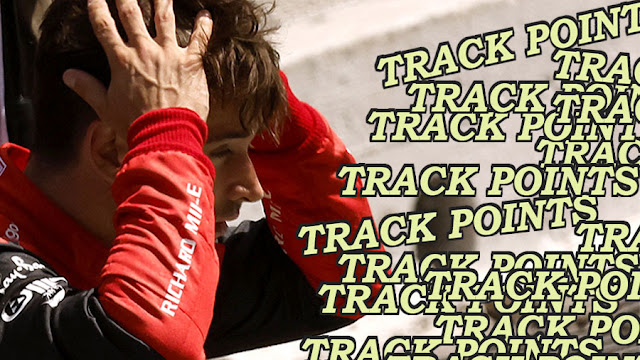 In the searing heat of Spain, the championship turned on its head. Hamilton and Magnussen took a trip into the gravel on lap one, Max battled with a dodgy rear wing that refused to give him DRS, and George Russell said "blimey" like a Beano character.

More importantly, Charles Leclerc's car gave up on him, and he topped the driver Track Points at the Circuit de Catalunya. An unexpected name to see at the top of our results. The Ham / Mags clash pretty much defined the other big driver points, giving Magnussen the Biggest Drop and Hamilton the Raceday Special for the longest time spent in the pitlane during a pit stop.

Haas, Ferrari and Williams lead the Track Points for constructors. It's fascinating to see all three of those teams dropping off in performance in their own way. Perhaps Williams should be the most worried, as their Track Points all came from a stone-cold terrible race finish. Last and third-from-last. Blimey.

Read on for all the Track Points in Spain.

Beige Flag: Alonso 10  |  Got in trouble for criticising the stewards^
Beige Flag: Norris 10  |  For looking like death from his tonsillitis^
No Beige Flag: Vettel had his bag stolen in Barcelona. The news came through too late for these results. We may consider giving him a Flag in the Monaco scores. No guarantee though.

Retirement: Alfa Romeo 10  |  Ferrari 10
Earliest Exit: Ferrari 5
Biggest Drop: Haas 5
Raceday Special: Mercedes 5
No Beige Flags for constructors at this race  |  There's controversy brewing over Aston Martin allegedly copying Red Bull's car design. We're holding off awarding a Beige Flag for now, partly because Aston have been given way more Flags (too many?) than any other constructor this year, and partly because we suspect this news story is only just starting. The League is watching...

Here is the Losers team commentary for Spain.

Here is the complete Losers team data for Spain.

No time to dally. The Monaco grand prix will take place in just a few days. After the gargantuan glitz of Miami, its star-studded celebrities and yachts are going to appear decidedly pedestrian. Have a look at the full 2022 F1 calendar.

We've held off releasing new Pitlane Punts due to other commitments (we've got a LIFE, y'know), but the plan is to release a couple of new punts shortly after we publish these results.

Starting in July, we're making a change to Fast Forecasts. At the moment, you get a 5-point Forecast bribe if you guess two correct 20-point Forecasts. This has happened once in six races, accounting for less than 2% of Forecasts. Absolute rubbish. Expect a tweak from July 1st onwards which should dramatically increase the chances of getting bribe points.