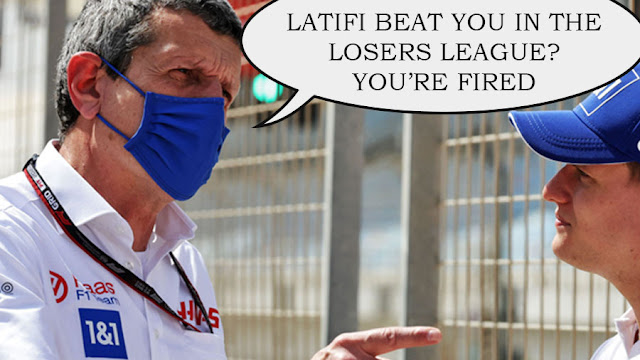 🔢 Mick Schumacher's Beige Flag secures Tardi Minardi top Track Points at Yas Marina, with a score of 43
🔢 Smushed together in second place, with a fine 42 Track Points each, are My heart will Grosjean, Scrapyard 17, The Blue Flag Boys and Vladimir Mazepin
🔢 Despite Ricciardo scooping no Track Points at all, Double Daley get 41 and the final spot in this list
This commentary page shows just the Losers team highlights for the Abu Dhabi grand prix. For the full Losers scores, see the data page.

Here are our final three teams that got the least Track Point. Unlike previous races, these teams avoid any consequence. Instead of playing automatic team actions, a cloud of shame shall hang over them like a fat cloud or a low-flying hippopotamus.

😳 Henry's Motors and Steady Jordan were third-from-last with 19 Track Points.
😳 Second from last with 17 Track Points are Sainz-Tropez.
😳 Our last bottom-pointer of the season is Mancunian Badboy Racing, ending the 2022 championship on an impressive low on just 16 Track Points.
Team pages will be updated soon.

Here are the driver and constructor Track Points in Abu Dhabi.

Here is the complete Losers team data for Abu Dhabi.

The next F1 Losers League championship will trundle off the starting blocks on 5 March 2023. Entries will open in the new year. Thank you to the teams that participated in this year's competition. You all added absolutely nothing and we are disgusted at your woeful lack of talent. We love you all.

We'll be posting to more social media next year: Twitter, if it's still around, and back on Facebook and Instagram. We're planning on possibly disastrous Track Points tweaks, adjustments to make team actions more frustrating, and a new, cruel bonus point system that will tighten up the scores like firmly clamped nipples.

Keep an eye on our socials - and this website - for when we announce entries opening for 2023. Happy losing, everyone.