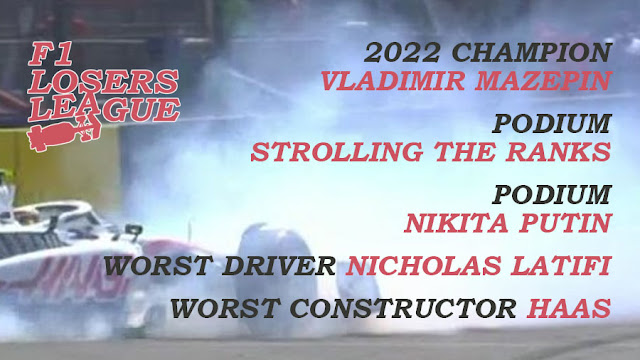 Here are the driver and constructor Track Points in Abu Dhabi.

Here is the Losers team commentary for Abu Dhabi.

Here is the complete Losers team data for Abu Dhabi.

The next F1 Losers League championship will trundle off the starting blocks on 5 March 2023. Entries will open in the new year. Thank you to the teams that participated in this year's competition. You all added absolutely nothing and we are disgusted at your woeful lack of talent. We love you all.

We'll be posting to more social media next year: Twitter, if it's still around, and back on Facebook and Instagram. We're planning on possibly disastrous Track Points tweaks, adjustments to make team actions more frustrating, and a new, cruel bonus point system that will tighten up the scores like firmly clamped nipples.

Keep an eye on our socials - and this website - for when we announce entries opening for 2023. Happy losing, everyone.