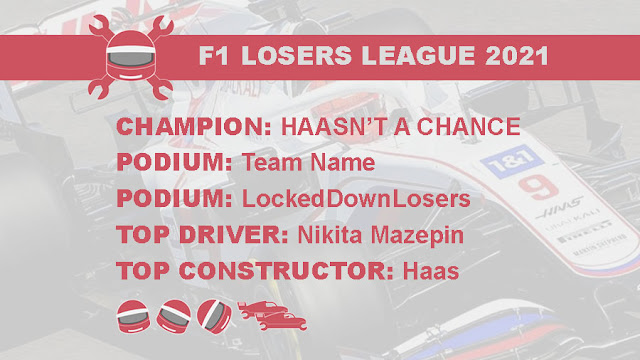 HAASN'T A CHANCE is F1 Losers League champion 2021, having not led the League previously this season. They started the year in 19th place, then dropped as low as 21st. But keeping Haas and Tsunoda on their team eventually paid off, as did their persistence in the face of Fast Forecast losses. Their cautious approach to Pitlane Punts starved them of high-stake wins, but it was a late Chump Punt gamble that won the day. Championships decided by a last-gasp moment of mayhem? Who'd have thunk it.

In second place is Team Name, whose 13-race streak in the lead of the Losers League came crashing down in Abu Dhabi. Their instinctive understanding of the betting system of Pitlane Punts was their strength. In their own words, "I thought it would be funny if I came last by gambling all my points away on Punts, but they kept on winning."

In third place is LockedDownLosers, who ran an extraordinarily tenacious campaign to climb to what was, in the end, a comfortable podium position.

Congratulations too to Nikita Mazepin and his Haas team for being driver and constructor champions. Team boss Guenther Steiner said at the start of the year that points will be hard to come by. Not in the Losers League.

Thank you to everyone who competed in 2021. It's been a lot of fun. We'll run the League again in 2022, as we continue to celebrate the blunders and backmarkers of Formula One.

Read on for the final Standings following the Abu Dhabi grand prix.

See all the race points awarded to drivers and constructors this season.

See all the Losers Teams scores this season.