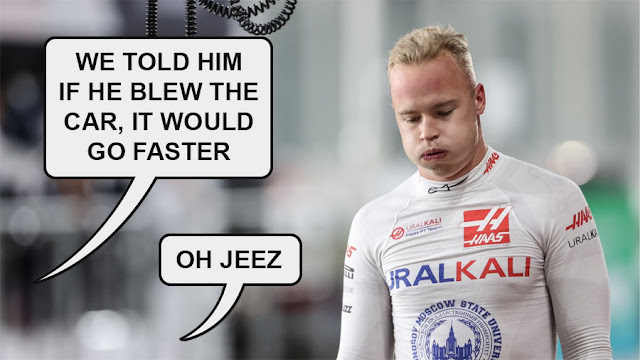 In the real Formula One race in Jeddah, two determined drivers battled in increasingly erratic ways in one of the tensest championship battles for some time. In the Losers League, Mazepin and Haas topped the points. Again. What a predictable and normal 2021, huh?

Neither Haas car could cope with the Saudi Arabia circuit, a high-pressure tube of a racetrack not unlike the Large Hadron Collider – only dustier and more likely to destroy someone's universe. Schumacher's retirement earned him Early Exit points and Verstappen a free pitstop. Mazepin's restart crash triggered a second red flag and the absolute chaos that was to come for the rest of the race. You do YOU, Haas.

This supercollided plenty of points at the cars, resulting in a great points haul for Losers teams. AlphaTauri got their fourth Backwards Bonus in three races, and we handed out a hefty number of Retirement points. We awarded eight Beige Flags for this race, more than any other race this season. Flags for constructors include fire and a polar bear, but also the death of Sir Frank Williams. Frank, we salute you with our pallid little flag.

Read on for all the points in Saudi Arabia.

Beige Flag: Mazepin 10 (turns out he has a "fat chassis"^, which is fine for humans, body positivity and all that, but maybe a problem with a racing car)
Beige Flag: Norris 10 (for having creepy fans^)
Beige Flag: Verstappen 10 (for clocking up the biggest penalties^ in Jeddah)

Here are the Losers Team scores for Saudi Arabia.

The season finale is upon us. Our latest standings suggest the F1 Losers championship battle isn't over, even if it's not as close as the remarkable real Formula One season. We have one final race in Abu Dhabi, at which most teams will still be running two Boost Buttons. Lots of triple points. To spice things up, we have one final, high-stakes, Pitlane Punt: play the 2021 Chump Punt now.