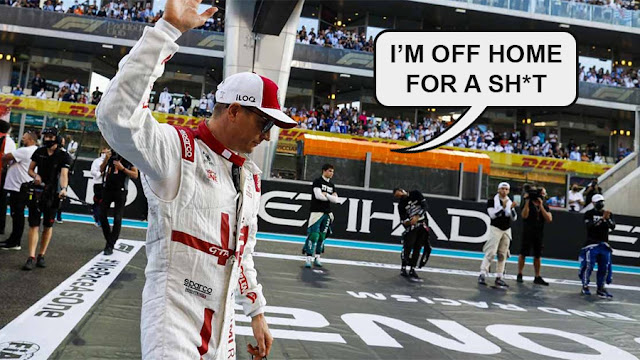 The end of an era: that's what they're all saying. And what a thrilling run it has been. Never again will we witness such a dominating performance in a rookie season as Nikita Mazepin's. He ended it all in the most loser-y way possible: by qualifying last then catching Covid and missing the race. He easily topped the points in Abu Dhabi. We salute you, king of spins.

Alfa Romeo topped the constructor points for the first time since the Portuguese grand prix. A possibly demotivated Kimi Raikkonen retired mid-race with brake problems (the car, not him), while Giovonazzi had his own terminal technical trouble. Williams follow just behind with their own double retirement, one of which caused a dramatic end to the race – not sure what happened: we never watch the front of the race.

A whole bunch of retirements at Yas Marina, including retirement points for Nikita not turning up. It's always fun when this injects a whole load of extra points into our Losers team scores.

Read on for all the points in Abu Dhabi.

Earliest Exit: Mazepin 5  |  Raikkonen 5  (Raikkonen was the first actual retirement on lap 25, but it's only fair to give the same points to Mazepin for "retiring" even earlier)

Race Win: Max Verstappen –25 (subject to appeal, but the League result will stand)

Beige Flag: Mazepin 10 (for catching Covid-19^ and missing the race – thankfully he's asymptomatic)
Beige Flag: Ocon 10 (for the slap on the wrist^ for impeding Vettel in qualifying)
Beige Flag: Ricciardo 10 (for facing Christmas in quarantine^)

Beige Flag: Mercedes 10 (for their post-race protests being dismissed by the FIA^)
Beige Flag: Red Bull 10 (for getting embroiled in the weirdest 'happy crash-mas' commercial^)

Here are the Losers Team scores for Abu Dhabi.

And here's how it's affected the final 2021 Standings.

Nothing. Absolutely nothing. Just a deep void of unhappiness where we play racecars with the bananas in the fruit bowl while waiting for the start of next year's League. Still. We have an F1 Losers League 2021 champion, which is nice.