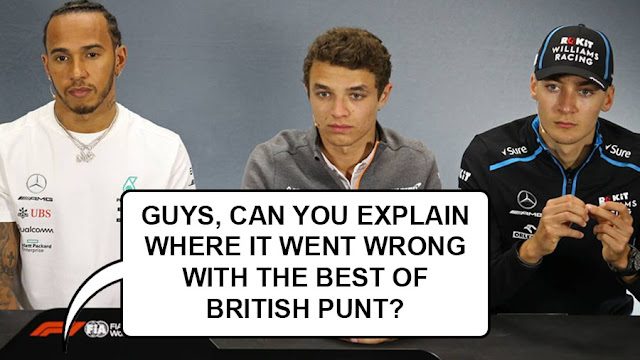 THE BIGGEST LOSERS IN BRITAIN

The cheering crowds were lovely to hear at the British grand prix. What an atmosphere. They were no doubt cheering for the F1 Losers League, because there were 11 Pitlane Punt wagers active at Silverstone, making this the most punted race of the season.

The crowd is an idiot because every Punt failed. Ocon finished well, which was a failure for the Ocon Odds-on. Hamilton won, which negated the Giantkiller. Bottas kept his job, so that messed up the Merc Merk. A herd of geese didn't invade the Haas garage, so that put paid to the Wildlife Wager fail for this particular race.

And worst of all, the one-off Best Of British Pitlane Punt came to nothing because a British driver didn't retire. By and large, Losers Teams have gained hundreds of points using Pitlane Punts, but this was a stinker.

See the effects of this below. Here are the Losers Team results for Britain. Read on to find out more.

High scores from Raikkonen and Haas gave identical teams Gunther's Gonna Get Ya and HAASN'T A CHANCE the most points in Britain, getting 44 points apiece. HAASN'T A CHANCE are on a great run at the moment, following an astonishing DRS / Punt one-two in Austria.

Haas's high score also helped out Lou-sers, who came third in Britain with 36 points, followed by another Haas-hastened team WereDrivingInReverse scoring 35. We can't tell Losers Teams how to run their operation, but each team currently has two Ejector Seats which is enough to switch your constructor to Haas. Just saying.

Next up are a whole bunch of teams scoring exactly 32 points, which is a bit weird. Why the coincidence? Is this a conspiracy? We suspect shenanigans. In the 32 club is Fernando Analonso, Haas Beens, Nikita Mazepimp and Thomas's Tractors.

See how this has shuffled the season standings.

With every race result, we like to name and shame three low-scoring teams that failed at losing. Current League leader Team Name didn't quite fall into the bottom three, but their costly points stake payments for unsuccessful Pitlane Punts put them way down the order. Dishonourable mention to them.

Murraylivesforeverinourhearts scored a single point in Britain (Gasly being their singular point scorer), which normally would find them at the bottom of the pecking order, but actually places them third from last. That's because two teams scored negative points. Who are these black holes sucking all that is loser-y from the Losers League? Brace yourself.

VroomDoom, currently second place in the F1 Losers League, scored minus-1 in Britain. They converted a pretty average score, not helped by a zero-scoring Tsunoda, into a negative score because they played the Best of British punt and failed.

And LockedDownLosers, currently fourth in the League, scored minus-8. We reckon this is the second worst race result of the season (Murraylivesforeverinourhearts scored minus-16 at Portugal back in May). LockedDownLosers did alright in Britain, especially with Haas on their team, but their bold Ocon Odds-on 40-point stake left them wanting.

Naturally, this has affected the standings, giving hope to every other Losers Team further down the loserboard.

(Side note: we realise the photograph heading this piece is a couple of years old, but look at them. Look at how glum they are. We couldn't resist.)

Here are the Drivers and Constructors Points for Britain.

The next grand prix is in Hungary on August 1st. Last year, Gasly (AlphaTauri) was the only retirement, and Russell (Williams) would have got the Backwards Bonus. If you feel like doubling your scores for this race, move a DRS. On August 4th, we give every Losers Team their third Ejector Seat, so there'll be no excuse for having a low-scoring team. Then, it's a summer break followed by default DRS race Belgium on August 29th.

THE NEXT DRS RACE