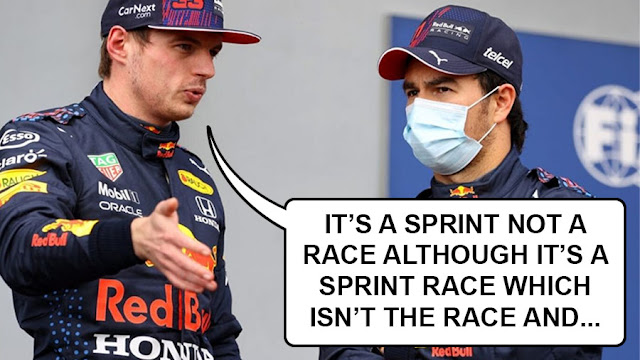 It's official. The jury is out on whether the sprint qualifying session worked. That's what the commentators kept saying. "The jury is out." Who is this jury? And do they have tickets to the race? We don't trust this mysterious jury.

What is certain is that Perez and Red Bull suddenly decided to be losers. The F1 Losers League is proud. They scored highly at the British grand prix, although one familiar constructor name took their usual position at the top of the terrible rankings at Silverstone.

British fans got the British winner they wanted. This is lovely: the Losers League CEO has watched Coulthard win at the British grand prix twice. However, this was a bad omen for the special Best Of British Pitlane Punts. Jump to the Losers Team points to see how that went.

Meanwhile, let's have a look at the drivers and constructors. Who got into the spirit of Britain? Who poured a lovely cup of tea, popped a corgi into a bowler hat, and did really bad at sport? Read on.

Gasly, Russell, Giovinazzi, Latifi, Raikkonen, Perez, Mazepin and Schumacher respectively earn 1, 2, 3, 4, 5, 6, 7 and 8 points for their finishing place outside the top ten at Silverstone. There were two retirements: Vettel and, most controversially, Verstappen. They each get 10 points for their DNFs.

Verstappen's race lasted just nine laps, so he gets the 5-point Earliest Exit bonus. The driver that lost the most cumulative places was Russell: his drop of three positions from sprint qualy to finish line earns him 5 points for the Backwards Bonus. And Hamilton gets the minus-25 Race Win Penalty: at least he gets one penalty he can't neutralise.

Five drivers are getting Beige Flags in Britain. Five! Lawks. Firstly, ten races into the season, Norris earns his first ever Losers Points. After England's defeat at the Euro football final, he was mugged for his expensive watch. We feel for Lando: the incident clearly left him shaken. We hope he can use his 10-point Beige Flag as a weapon against any future criminals.

There has been a lot of debate about whether the Hamilton / Verstappen crash was a racing incident, but we can't ignore the avalanche of criticism specifically aimed at Hamilton's behaviour. Actual criticism, that is, not the horrible racist stuff from idiots or keyboard warriors pretending it's a football rivalry. A Beige Flag and 10 points to him. We decided we'd only give points for failures in the Sprint Race if someone *really* messed it up. Oh boy, did Perez deliver. He gets a 10-point Beige Flag for turning a third-row start into a pitlane grid spot.

Finally, let's lighten things up. Ricciardo was overheard calling the new 2022 F1 car "terrible” and “sh*t". Or rather, he says he was talking about something else, possibly the paint scheme. Hmmm. We've got our eye on you, DR. A 10-point Beige Flag to you. And finally, TV pundit and former racer Marc Surer called Raikkonen "too old" to be in F1. Poor Kimi. Let's give him a Beige Flag and 10 points.

AlphaTauri, Williams, Red Bull, Alfa Romeo and Haas get 1, 6, 6, 8 and 15 points for their finishing positions at the British grand prix. It's unusual to see Red Bull in that list. For retiring, Red Bull and Aston Martin scoop up 10 points apiece. Red Bull also get 5 points for the Earliest Exit, while Williams get 5 points for the Backwards Bonus. And, of course, its minus-25 to Mercedes for a Race Win Penalty.

Because there have been rumours about Dmitry Mazepin (Nikita's father) replacing Guenther Steiner as the Haas team boss, rumours Steiner has dismissed, then it's a 10-point Beige Flag to Haas. The only other Beige Flag we're giving to constructors in this race is to McLaren. Their team boss Zak Brown caught Covid and had to sit out the British grand prix. A Beige Flag to him! 10 points! Wow, we're harsh.

Here are the Losers Team scores for Britain.

The next grand prix is in Hungary on August 1st. Last year, Gasly (AlphaTauri) was the only retirement, and Russell (Williams) would have got the Backwards Bonus. If you feel like doubling your scores for this race, move a DRS. On August 4th, we give every Losers Team their third Ejector Seat, so there'll be no excuse for having a low-scoring team. Then, it's a summer break followed by default DRS race Belgium on August 29th.