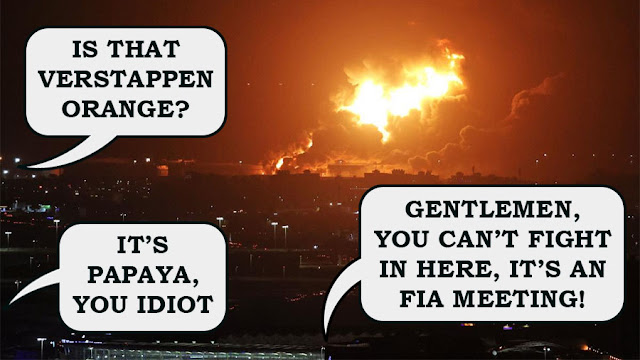 This race was a high scorer: almost as high as the track walls the F1 drivers can't see around. Cars earned 242 Track Points in total, compared to a meagre 176 in Bahrain.

Yuki Tsunoda barely got to drive his terrible AlphaTauri. Mick Schumacher reduced his car to tindersticks. Nicholas Latifi tried to replicate Abu Dhabi 2021 by having a conversation with a wall. And all along, we tried to ignore the fact the Saudi Arabia grand prix takes place in a war zone. The coverage of the practice session featured a literal missile attack. We presume all those "no war" t-shirts are now in being used as rags in the team garages. Jeez.

Mick Schumacher was indeed the highest scorer, his terrifying crash reminding us how nasty this high-speed circuit can be. We love failure at the Losers League, but we really want our drivers to be safe. Thankfully, he was fine. Meanwhile, Williams are proving to be the Losers League's new favourite team, scoring a double retirement.

And spare a thought for Zhou Guanyu, who is now the first Chinese driver in history to score an F1 Losers League Track Point. We'll be in contact with Xi Jinping about organising a national holiday. We're thinking a parade: bunting, floats, coconut shy, that sort of thing. Lots of dragons dressed as F1 drivers. Uncle Geoff slumped in the corner, drunk on saké. It's going to be lovely.

Er... Where were we? Oh yes. Read on for all the Track Points in Saudi Arabia.

Earliest Exit: Latifi 5  |  Schumacher 5  |  Tsunoda 5  |  Latifi retired first, but it's only fair for the non-starters to get these points too

Beige Flag: Schumacher 10  |  Not for the crash, because we don't award Flags for on-track action, but for costing his team a zillion quid^ then missing a whole race
Beige Flag: Stroll 10  |  For being lambasted^ by the ever-reliable lambaster Ralf Schumacher
Beige Flag: Vettel 10  |  For missing another race^ because of Covid

Beige Flag: None for constructors this time, although Haas came very close for their repair bill

Here is the Losers team commentary for Saudi Arabia.

Here is the complete Losers team data for Saudi Arabia.

The next race is in Australia on 10 April. This is home grand prix for Daniel Ricciardo, who's currently fourth in the F1 Losers driver standings between Schumacher and Tsunoda. Before that, we'll release some new Pitlane Punts - have a look at the three already available to play. There's a form of tennis called Australian doubles, which pits two players versus a single player in the style of the quiz show Blockbusters. This seems unfair. We like it. Why not create your own doubles in Australia by pressing one of your Boost Buttons now.