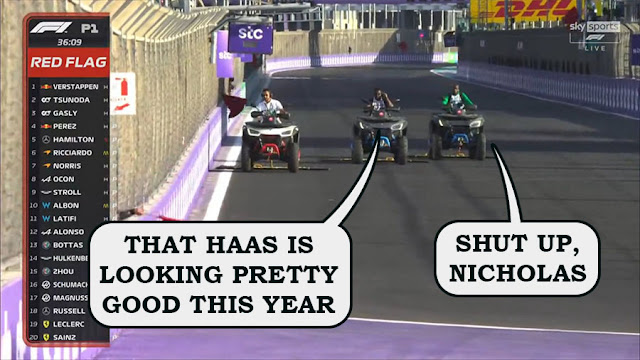 This is the commentary page for the Saudi Arabia grand prix, featuring highlights of the Losers team action. For this race's full Losers team data featuring everyone's scores, see the data page.


Carry on reading this commentary.

This is the commentary page for the Saudi Arabia grand prix, featuring highlights of the Losers team action. For this race's full Losers team data featuring everyone's scores, see the data page.

At every race, we will shine a spotlight on the three teams that scored the *fewest* Track Points. If your team appears in this listing, you are required to wear a cone of shame until the next race. Partly to humiliate you, but also partly so you don't try and lick your own genitals. Now back in your basket. BAD dog. Oh and we're going to make you carry out some League actions against your will... read on.
Teams featured in this Podium of Shame – we will be in touch about your automatic team actions.

A third of the Losers teams took the buckin' bronco by the horns after the Bahrain grand prix, and used their Ejector Seats to replace their team choices for even worse team choices. Good work, you lot. Here's a summary, kept brief because we've all got homes to go to:
The result of all that furious Ejecting? Every single team that Ejected improved its points position race-on-race, so they all get a 5-point Ejector bribe. If you've not Ejected yet, have a go.

Here's the big news. Team Name lost their minds and used ALL of their season's Boost Buttons all at once. That means six-times Track Points and a stonking lead of the F1 Losers League. The question is this: did they boost well, or have they blown all their Boosts on a weak race, allowing everyone else to catch them as the season progresses?
Team Name have gained a significant strategic advantage and it's now up to everyone else to catch up. Their Boost continues into the Australian grand prix where they could, of course, undo all of their hard work.
Other teams Boosted but their Track Points scores were pretty average. They were:
If your team goes half-a-dozen races without any Boost Button activity, we'll automatically press one of your Buttons. Like the above teams, you can take control of this: Boost for the next race now.

FAST FORECASTS IN SAUDI ARABIA
Remember, it's 20 points for an exactly correct Forecast, 5 points if it's almost correct, and minus-5 if it's wrong.
Make a Fast Forecast prediction for the next race now.
PITLANE PUNTS IN SAUDI ARABIA
Not a great start for Pitlane Punts. However, when they do pay off, they do so generously. All of these Punts remain playable for future races, with the odds on the Williams punt increasing to 3:1. We'll announce more Pitlane Punts soon.

Here are the driver and constructor Track Points in Saudi Arabia.

Here is the complete Losers team data for Saudi Arabia.

The next race is in Australia on 10 April. This is home grand prix for Daniel Ricciardo, who's currently fourth in the F1 Losers driver standings between Schumacher and Tsunoda. Before that, we'll release some new Pitlane Punts - have a look at the three already available to play. There's a form of tennis called Australian doubles, which pits two players versus a single player in the style of the quiz show Blockbusters. This seems unfair. We like it. Why not create your own doubles in Australia by pressing one of your Boost Buttons now.