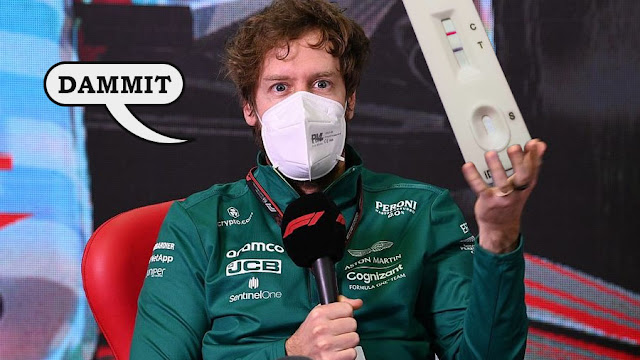 What comes to mind when you think of the opening race of the 2022 F1 season? The Red Bulls shuddering to a stop? Pierre Ghastly jumping out of his fireball car? The sleek new cars under the shining lights?

If any of that came to mind, your brain's an idiot. Sebastian Vettel is who you should be thinking about. The man's POORLY, for goodness sake. He picks up 10 beige flag Track Points for being ill (see our full points roundup below). Even worse, F1's super-sub Nico Hulkenberg took Seb's place in Bahrain and the Hulk ended up dead last. That's a whole bunch of extra Track Points he earned for Vettel. So, even though he wasn't even there, sickly Sebastian Vettel tops the Track Points at the Bahrain grand prix. Gasly and Riccardo are close behind thanks to, respectively, their spectacular blow-up and unspectacular slow-down.

Top of the Track Points for constructors are Red Bull, who ended the race in a flurry of technical fails. Something about fuel pumps. We never expected the Bulls to be leading the constructors standings so early on. Four other constructors scored double Track Points in this race – astonishingly for those who followed the Losers League in 2021, one of those was *not* Haas. We truly are in a new era.

Read on for all the Track Points in Bahrain.

Beige Flag: Ricciardo 10 (for Covid-19 ruling him out of testing in Bahrain^)
Beige Flag: Vettel 10 (for missing the race^ because of Covid-19)

Here is the Losers team commentary for Bahrain.

Here is the complete Losers team data for Bahrain.

Disappointed with your points haul in Bahrain? Change your team choices with Ejector Seats. Go on. Do it now! In a few days, we will launch our first Pitlane Punts of the season – gamble your hard-earned points in wonderfully reckless ways! The next race is Saudi Arabia on 27 March. At last year's Saudi race, Toto Wolff destroyed a set of headphones. What will he break this time round?