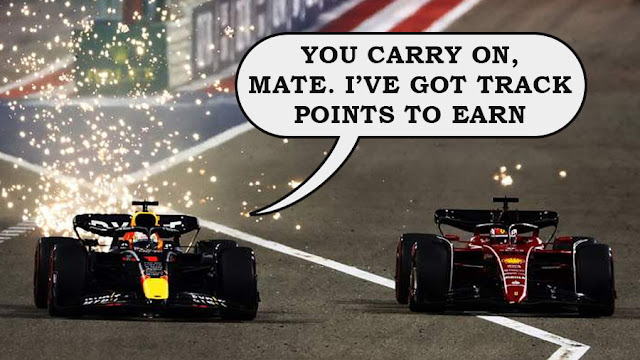 This is the commentary page for the Bahrain grand prix, featuring highlights of the Losers team action. For this race's full Losers team data featuring everyone's scores, see the data page.

This is the commentary page for the Bahrain grand prix, featuring highlights of the Losers team action. For this race's full Losers team data featuring everyone's Track Points, see the data page.

Sometimes Losers teams forget how to lose. At every race, we will highlight the three teams that scored the *fewest* Track Points. In fact, we're so disgusted at their non-loser leanings, we're going to force them to do things. Horrible things. If your team is listed here, we'll be in touch with more details.

No-one played Ejector Seats in Bahrain. This is because it was the first race of the season. Playing an Ejector Seat before the opening race would have been stupid, like eating a meal before you've cooked it, or getting naked before going clothes shopping. Wait. Does that make sense? Anyway, you get the point.

All three of these teams will remain boosted for a second race, the Saudi Arabian grand prix this weekend.
If your team goes half-a-dozen races without any Boost Button activity, we'll automatically press one of your Buttons. Like the above teams, you can take control of this: Boost for the next race now.
FAST FORECASTS IN BAHRAIN
Remember, it's 20 points for an exactly correct Forecast, 5 points if it's almost correct, and minus-5 if it's wrong.
It's nice to see Fast Forecasts catching on so quickly. That's a net gain of 90 points across the teams, so it's worth it. Make a Fast Forecast prediction for the next race now.
PITLANE PUNTS IN BAHRAIN
They're coming soon. We've just got to think of some good ones. Watch this space.

Here are the driver and constructor Track Points in Bahrain.

Here is the complete Losers team data for Bahrain.

Disappointed with your points haul in Bahrain? Change your team choices with Ejector Seats. Go on. Do it now! In a few days, we will launch our first Pitlane Punts of the season – gamble your hard-earned points in wonderfully reckless ways! The next race is Saudi Arabia on 27 March. At last year's Saudi race, Toto Wolff destroyed a set of headphones. What will he break this time round?