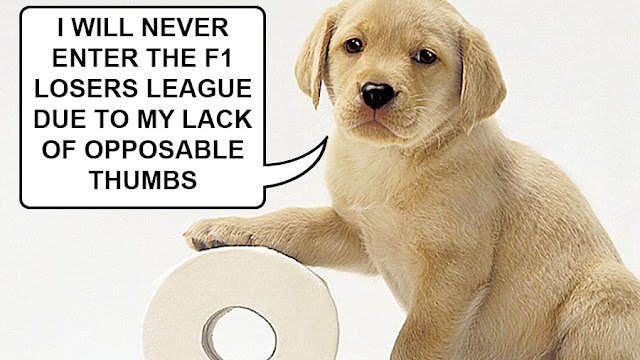 THE BIGGEST LOSERS IN AZERBAIJAN

Ouch. That hurt. Sergio Perez winning in Azerbaijan really stung some of our Losers Teams. Especially with it being a DRS (Double Race Scores) grand prix, which means every point lost was an extra kick in the gut.

Still, let's look on the positive side. All over the world, there are cute puppies playing with toilet rolls. There are fields of lambs frolicking on sunlit hillocks. And one Losers Team was very clever indeed, manipulating their DRS in Azerbaijan to great effect. We are in awe. Read on to find out more.

At the start of the season, every Losers Team gets nine DRS allocations to play throughout the season. Think of them as bonus cards which, when played, automatically double that team's race score. Because we know most teams will forget to play those cards, we automatically pre-allocate DRS to nine specific races throughout the season. Losers Teams can stick to those defaults, as most do, or they can move them to other races.

Pierre Ghastly understood this well. Azerbaijan was one such default DRS race. Pierre Ghastly de-allocated their DRS in Portugal on May 2nd and moved it to the Azerbaijan grand prix. That meant they had two DRS allocations in Azerbaijan, which gave them triple points, while every other team was "only" on double points. Did it pay off? It did, and then some.

Let's have a look at the top four scores in Azerbaijan WITHOUT any DRS multiples:

The scores were close, but Pierre Ghastly topped the table in Baku even without the aid of DRS. Scroll down to see how the final scores looked with the multiples taken into account. What a phenomenal risk PG took, especially when you consider how badly some other teams fared: have a look at the Podium Of Shame below.

Pierre Ghastly were aided by having Williams and Stroll on their team, both of whom scored highly. As you can see, they were closely followed by Fernando Analonso, LockedDownLosers, Thomas's Tractors and Back of the shed, all of whom picked up a load of points from Latifi and Ocon's woes.

Oh and thanks to Stroll and Alpine's poor races, it's nice to see Murraylivesforeverinourhearts perform nice and loserly in Baku, practically doubling their entire season's score in just one race.

Who is getting sent to the headteacher's office for a thorough dressing down? There were two Losers Teams that truly forgot how to lose in Azerbaijan. Let's name and shame them. Pitchforks out!

Clean Trolls should have done well. They had Stroll on their Losers Team, which was worth 20 points, doubled to 40 because of the boost from DRS. And Mancunian Badboy Racing should also have bossed it in Baku, picking up reasonable points from race retirees Aston Martin and Ocon.

But both of these Losers Teams made one fatal error. They had Perez on their team. He won the race, which meant a Race Win Penalty. The minus-25 points (minus-50 with DRS doubling) reduced each of their Losers Scores to a dead flat zero.

Have a look at the table below. Two big fat 0s. Like two big eggs of sadness.

Let's never speak of this again.

Here are the Drivers and Constructors Points for Azerbaijan.

We're about to face three back-to-back races: the French, the Styrian and the Austrian grands prix. And if you're wondering, the Styrian race is also in Austria. You can use your first Ejector Seat to get rid of one of your not-rubbish-enough drivers if you want. Or wait until the second Ejector Seat is unlocked on June 30th – with two Seats, you can replace your constructor. Heady days.