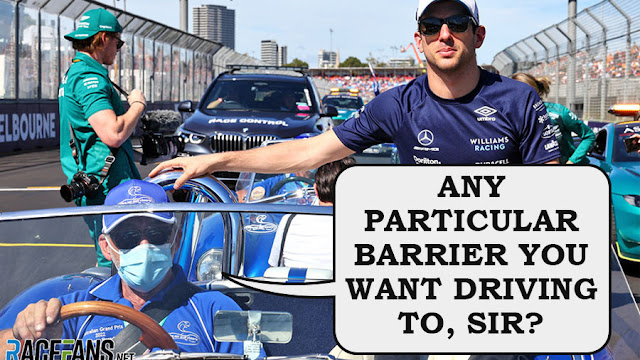 This felt like a low-scoring race for Track Points, but it equalled the Track Points in Bahrain. We were a little bit spoiled in Saudi Arabia's stonker of a Track Points fest.

At every race, we spotlight the Losers teams that scored the least Track Points. You cannot skimp on your Track Points and get away with it. We won't allow it. No way. Here are the Teams worthy of our ire - and terrible consequences - in Australia.
Teams featured in this Podium of Shame – we will be in touch about your automatic team actions.

Three Losers teams got themselves 5-point Ejector bribes in Australia. This is because their Ejector Seats improved their Track Points position. They were as follows:
Nice work. A number of other teams also Ejected. Although they didn't get the Ejector bribe, it's always worth using those Seats to get more Track Points. The other ejectors were as follows:
Over half of the Losers teams are yet to launch an Ejector Seat. It's a really easy way of improving your loserdom in the League. Use an Ejector Seat now.

The great big hairy dangling question after the Saudi Arabian grand prix was this: Would Team Name carry out an audacious points grab with their five Boost Buttons, as they did in Jeddah? Or would they undo all of their good work? Let's find out! I mean, there are spoilers above, but let's pretend you've not read that.
To add insult to injury, we reckon we gave Team Name too many extra Boost Button points in Saudi Arabia. We miscalculated, giving them six-times-64 extra points instead of five-times-64 extra points. To save redoing a tonne of work, we'll probably adjust things at the next race. Team Name, we'll be in touch!
If your team goes half-a-dozen races without any Boost Button activity, we'll automatically press one of your Buttons. Get ahead of the game: Boost for the next race now.
FAST FORECASTS IN AUSTRALIA
A reminder: it's 20 points for an exactly correct Forecast, 5 points if it's almost correct, and minus-5 if it's wrong.
Feeling lucky, punk? Make a Fast Forecast prediction for the next race now.
PITLANE PUNTS IN AUSTRALIA
Nearly 350 points were earned from Pitlane Punts by our plucky Losers teams in Australia. When they pay off, they really pay off. We'll have more punts on the way. See the full list of playable Pitlane Punts.

Here are the driver and constructor Track Points in Australia.

Here is the complete Losers team data for Australia.

On April 24, we pop to Italy for Ferrari's home race, the Emilia Romagna grand prix. Known as Imola to its friends. This race weekend will feature a sprint race, which means the Sprint Drop points element kicks in. This means an extra 5 Track Points given to the car that drops down the order the most during the sprint session. Worth playing a Boost Button for this? This will also be the last race in which the Raceday Special gives 5 Track Points to the car last on the grid. From May, it pivots to the car with the slowest pit time of the race. Learn more about Track Points. While we gear up for Imola, watch out for a couple more Pitlane Punts appearing. More? Yes indeed. We really are spoiling you.