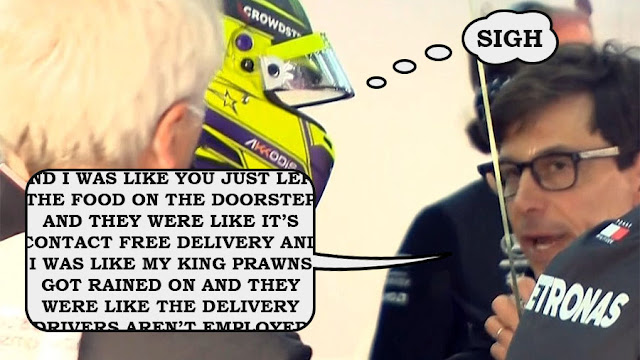 This is the commentary page for the Emilia Romagna grand prix, featuring highlights of the Losers team action. For this race's full Losers team data featuring everyone's scores, see the data page.

At every race, we pay special attention to the Losers teams that scored the fewest Track Points. These teams shall be vilified, villainised, victimised and vituperated, then vanquished out of the village with, erm, vegetables. They will also be made to play automatic team actions against their will at the League's discretion.
Teams featured in this Podium of Shame will have any resulting points losses waived. We will be in touch with more detail on your automatic team actions.

We had a record 19 Ejector Seat changes across 13 Losers teams in Imola. The following teams get 5-point Ejector bribes because their Track Points in Imola were an improvement from the previous race in Australia. A short-term metric, but hey! Points!
The following teams scored fewer points in this race, so don't get the Ejector bribe. They can take comfort from the fact that it's a marathon, not a sprint. Unless there's a sprint, in which case it's a sprint.
The most dumped driver out of that list was Zhou. Want to score more Track Points? Ejecting is where's it's at – we recommend Losers teams do this regularly. Use an Ejector Seat now.

Eight Losers teams ran Boost Buttons for this race, most of them carry-overs from Australia. Let's see how these boosty belters behaved.
If your team goes half-a-dozen races without any Boost Button activity, we'll automatically press one of your Buttons. For most of you, this will happen in three races' time. Get ahead of the game: Boost for the next race now.
FAST FORECASTS IN IMOLA
A reminder: it's 20 points for an exactly correct Fast Forecast, 5 points if it's almost correct, and minus-5 if it's wrong.
A clarification about the Grid Position Forecast. Not surprisingly, the sprint format confused things for the Losers teams – and for us. In Imola, the deadline for the Grid Position Forecast was Friday's qualifying, and the prediction was for Sunday's grid line-up. This wasn't good enough. For the next sprint weekend, we'll make the deadline the start of Saturday's Sprint session.
Is your fickle finger of fate in fine fettle? Make a Fast Forecast prediction for the next race now.
PITLANE PUNTS IN IMOLA
We'll keep releasing a new punts in Formula One's "off" weeks, at least until the summer break when we'll shuffle things around. 78 points were won by gambling teams in this race, and 29 stake points lost. Always a net gain. See the full list of playable Pitlane Punts.

Here are the driver and constructor Track Points in Imola.

Here is the complete Losers team data for Imola.

It's Miami next on May 8th, a brand new circuit in which anything could happen. See the season calendar. We have a new Pitlane Punt especially for this grand prix: play the Miami 5-0 Punt now. We'll have another new Pitlane Punt in a few days: see our Pitlane Punt page for updates or keep an eye on our Twitter feed^.

Announcement time! On Mayday, which keen calendar followers will know is May 1st, we will have a Flash Fast Forecast Freebie. Any Fast Forecasts predicted on this date will have any losses waived – that means zero points lost if you get it wrong! Applies to UK time only on May 1st. Get those predictions scribbled on the back of a napkin now.

The Raceday Special Track Points element has changed. Instead of giving 5 points to the car last on the grid, these 5 points now go to the car with the slowest pit time of the race. We don't mean the DHL three-second-or-so fastest stop as shown on telly. We mean the entire pitlane usage, according to the FIA's official pit stop summary^. The Raceday Special just got trickier.