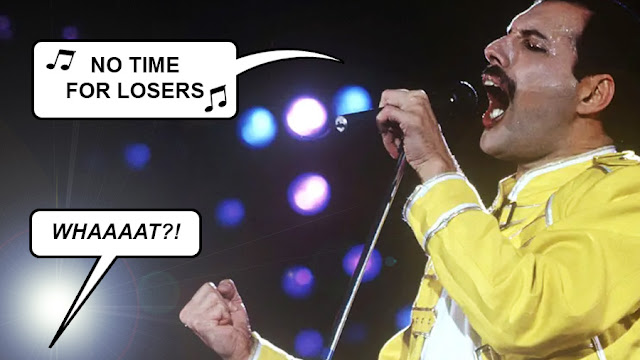 THE BIGGEST LOSERS IN SPAIN

Look at you, watching the Spanish grand prix on your big screen telly. Pop corn in one hand, Blue Nun in the other. You've got one eye on the racing action, and one eye on the F1 Losers League app, which is giving blow-by-blow telemetry on the worst elements of the grand prix. The F1 Losers app doesn't exist. It's just some crayon you've scrawled on a piece of toilet paper.

In Spain, one Losers Team absolutely nailed the DRS system to score more points in a single race than any other team so far. While many teams still did pretty well for Losers Points, others will be desperately waiting for the unlocking of the first Ejector Seat, allowing them to dump team choices that are proving to be too successful. Mentioning no names. NORRIS.

Which Losers Teams brought the pain in Spain? Read on.

HAASN'T A CHANCE topped the points in Espagna alongside Gunther's Gonna Get Ya, both teams benefitting from Tsunoda's tantrum and subsequent Beige Flag. However, HAASN'T A CHANCE got an extra boost by moving their DRS from Portugal to Spain, giving them double points and the single biggest score of any Losers Team this season. A great DRS play from them.

Cruthers Car Co. and Haas Beens both also got a Tsunoda kick, giving them joint third place in Spain. Following behind them was NEEEOOOOWWWW, the team that most sounds like a cat falling down a well, and bunched up in joint sixth are Panda Pops, Tardi Minardi and VroomDoom.

Murraylivesforeverinourhearts also played their DRS, but it only gave them an extra 13 points. LockedDownLosers lost points on a failed Iberian Pitlane Punt. Meanwhile, Team Name had a stinking time in Spain. They would have scored 60 points and joint first in this race if they hadn't piled most of their points into Pitlane Punts, which they then lost. Ouch.
So far, no team has successfully gambled on a Pitlane Punt. Want to buck the trend? Try the Charles Chance in Monaco, and look out for more (more winnable?) Pitlane Punts coming soon.

Have a look at all the Spanish team scores further down this page.

"The moment that you stepped in the room, you took my breath away," sang Freddie Mercury in 'Barcelona'. Which Losers Teams stepped into the room and stank the place out? Here are the three least-losing teams in Spain.

Mancunian Badboy Racing scored the least points: having Leclerc and Ocon on their team really isn't doing them any favours. Then there was LockedDownLosers, hindered by that failed Punt. And Not good on the BENds came third last in Spain, despite having Mazepin as one of their choices.

We want each of these teams to write out one hundred times "I regret all the choices I made in the 2021 F1 Losers League". In Spanish. Using one of those fading felt tip pens that you keep having to lick the end of even though that probably doesn't make much difference.

* DRS played at this race

Here are the Drivers and Constructors Points for Spain.

The next race, on May 23rd, is the Monaco grand prix. Get hyped for that race by playing the Charles Chance Pitlane Punt. On May 26th, we will unlock every team's first Ejector Seat, which will allow you to dump your team's least losing driver. We then move into the second default DRS race of the season in Azerbaijan, so expect more double points. Oh and there are some brand new Pitlane Punts on the way. Jubilation!