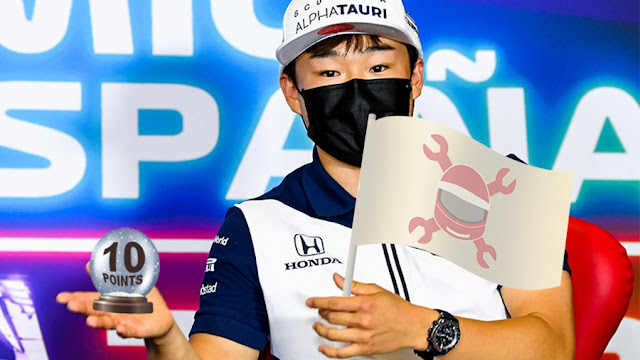 We asked Valtteri Bottas to write this race report for us. However, at the crucial moment, he disobeyed our orders. See what we did there? That was a reference to Bottas not moving aside for Hamilton at the Spanish grand prix. It's this kind of clever narrative that sets the F1 Losers League apart from other fantasy leagues.
Verstappen described himself as a "sitting duck" as Hamilton reeled him in for a race win. There was plenty of flapping about across the field, with the Spanish race offering more overtaking as usual. However, the usual turkeys reared their ugly heads: Haas finishing 92 laps down; Aston Martin disappointing again; Russell being in the points for about a quarter of a second.
It was no surprise to see constructor Haas top the points in Spain. As for the drivers, it was rookie Yuki Tsunoda who came through as biggest loser, his early promise starting to show more than a few signs of wear and tear.
Who was a Catalonian car-tastrophe at the Spanish grand prix? Read on.

Stroll, Raikkonen, Vettel, Russell, Giovinazzi, Latifi, Alonso, Schumacher and Mazepin each get 1, 2, 3, 4, 5, 6, 7, 8 and 9 points respectively. As with Portugal, there was only one non-finisher. That was Tsunoda, who gets 10 points for his DNF.

That also means Tsunoda picks up the 5 point Earliest Exit bonus. Alonso gets the 5-point Backwards Bonus for qualifying in tenth then dropping to a lowly seventeenth, which was all the more remarkable for having being achieved in just the final six laps of the race. Meanwhile, Hamilton gets the minus-25 point Race Win Penalty, completing a hat trick of horrible successes.

We have a tonne of Beige Flags to foist upon drivers. Bottas was battling ever-intense replacement rumours. 10 points to him, and a P45. Perez was nursing a shoulder injury and he said it made him all dizzy. Waaah waaah: 10 points to him. Tsunoda threw his toys out of the pram after qualifying, and had to apologise for saying Gasly got all the best equipment. 10 points to him (pictured).

And in 2021's most losery F1 moment yet, Raikkonen revealed that, following his prang in Portugal, he was mocked by his six-year-old son. His go-karting child told him he should have been looking where he was going. Here, Raikkonen, have a Beige Flag and 10 points for being totally schooled by your offspring.

Aston Martin, Alpine, AlphaTauri, Williams and Haas pick up 4, 7, 7, 10 and 17 respectively for their cars finishing outside the top ten, while AlphaTauri receive a further 10 points for the race's single retirement.

Tsunoda's Earliest Exit gives AlphaTauri another 5 points. It's interesting to see how this promising rookie is increasingly looking like a liability. And Alonso's terrible tail-off at the end of the race gives Alpine the 5-point Backwards Bonus. Mercedes get the minus-25 point Race Win Penalty for Hamilton's waltz past Verstappen for the victory.

Only one constructor gets a Beige Flag, in what looks like an ongoing trend of the drivers being way more Flaggy than the constructors. This 10-point Flag goes to Mercedes, who have lost a bunch of employees to Red Bull. The energy drink supremos are on a recruitment drive, and not even an offer of a double salary could stop the brain drain from Merc. Cor!

Here are the Losers Team scores for Spain.

The next race, on May 23rd, is the Monaco grand prix. Get hyped for that race by playing the Charles Chance Pitlane Punt. On May 26th, we will unlock every team's first Ejector Seat, which will allow you to dump your team's least losing driver. We then move into the second default DRS race of the season in Azerbaijan, so expect more double points. Oh and there are some brand new Pitlane Punts on the way. Jubilation!