Break Assist: a new portal of chaos for the F1 Losers League 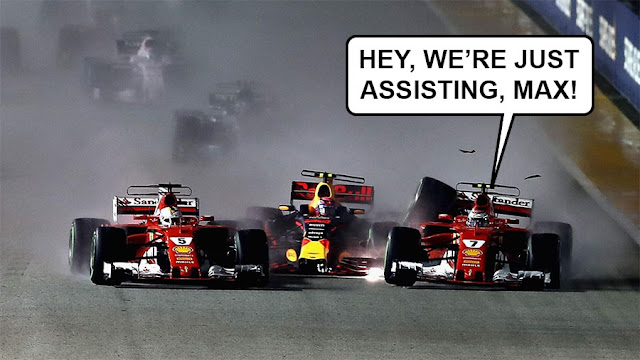 It has become clear to the F1 Losers League that there are teams wallowing in the lower ranks of the competition, seemingly happy with their half-hearted embrace of loserdom. You're like Coldplay fans, gently bopping to your drizzle-grey sonic mulch.

No more. Break Assist is here.

When we publish race results, we produce a lovely big table of Losers Teams scores. Starting from the Belgian grand prix, we're introducing Break Assist, a special results tool which will effectively grab that points table and bash it with a hammer.

How will Break Assist work? Let's start with the team that ends up in last place in the race results, taking star place in our Podium of Shame. Whichever team scores least will have an Ejector Seat automatically triggered. Bang! Just like that. Whether they like it or not, the least losing team will have their lowest scoring driver dumped.

The League will randomly pick a replacement – with a couple of caveats. We won't include 2021 grand prix winners and we'll abide by the all-important Pit Garage Rule. That team will then be down an Ejector Seat and will have a slightly adjusted team.

Break Assist doesn't stop there. Another team randomly selected from the bottom quarter of the scores will be forced to play a Pitlane Punt. The Punt will be selected by the Losers League using our IMMENSE wisdom and/or a blindfold and dart board. If the Punt fails, the League will waive any stakes payable.

There's more. Another team randomly picked from the lowest half of the scores will be made to play a Fast Forecast. Again, this will be selected by the Losers League, and if it fails, the League will waive any point losses incurred.

Why are wading in like a frazzled head teacher looking for an innocent pupil to shout at? Because we want to tighten up the scores, and this slightly chaotic intervention seems like a good way of doing it.  It'll increase involvement, and hopefully get some teams earning more Losers points. Some teams are clearly not broken enough, and in the spirit of loserdom, we want to break you more.

We have a couple more ideas for Break Assist, but we won't launch them until the 13th race of the season. There's a clue in that number...

We understand that Break Assist might be upsetting, but it's not us you're letting down. You're letting down yourself. Now take this letter home to your mother and we'll chat again on parents' day.

The F1 Losers League is a fantasy league like no other. Welcome to the new portal of havoc that is Break Assist.