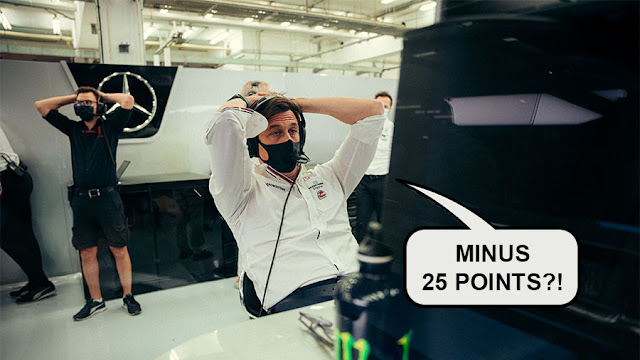 THE BIGGEST LOSERS IN BAHRAIN

The F1 season is back, and already our Losers Teams are feeling the full force of failure. As one entrant put it on Twitter, "I'm appalled at myself for being so pleased to see Mazepin out on his first lap!"

If you want to see all the points awarded to drivers and constructors, see Bahrain's Race Points here. How has this panned out for the Losers Teams? Let's look at who failed brilliantly – and who didn't fail enough. Read on.

The Pit Lockers found the key to loserdom in Bahrain, topping the scores with 58 Losers Points. Having Mazepin on their team helped, as did Ocon's Beige Flag and a couple of retirements. They were the only team to score double-figure points with every one of their team choices: certainly one to watch for 2021.

Panda Pops gained from Mazepin and Vettel's woes, and would have topped the points if Tsunoda hadn't been so good on his Formula One debut. Back of the shed scored third place, with Fernando Analonso, LockedDownLosers and Thomas's Tractors bunching up just behind.

If any one of these terrible top teams had chosen to apply DRS to this race, they would have been racing into a distant F1 Losers lead. But hey, if the good Lord had meant us to have hindsight, we'd have eyeballs on our butt.

There's a table with all the Losers Teams scores from Bahrain below.

Cruthers Car Co. scored very few points in Bahrain, with Tsunoda and Bottas earning them zero Losers Points. WereDrivingInReverse had three non-scorers: I expect they will be writing a strong letter of complaint to their team choices Tsunoda, Stroll and Norris. And Mancunian Badboy Racing were too much of a Goodboy, with plucky pitlane catapult Perez scoring them a big fat zero.

Every now and then, a Losers Team is successful by mistake. It's almost as if they haven't understood the concept of loserdom. Give them an ice cream cone, and they'd happily eat it instead of doing what a loser should do: tripping on a paving stone and dropping the delicious dessert down a drain.

The League forgives you, losers. Just don't do it again.

Here are the Drivers and Constructors Points for Bahrain.

The next grand prix is in Italy on April 18th, so there's a bit of a wait. We'll launch the first Pitlane Punts on April 21st. The Portuguese grand prix at the start of May will be a DRS race, although you can move that DRS allocation to a different race if you want.