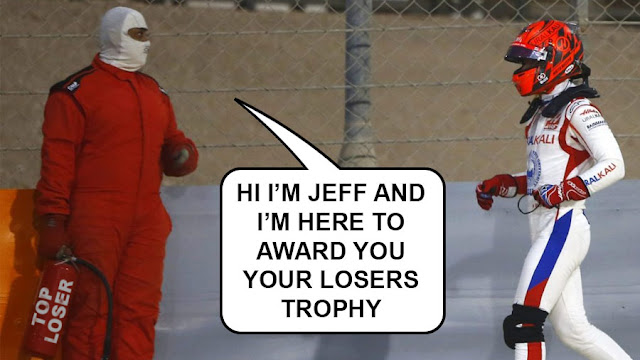 Haas rookie Nikita Mazepin described his opening lap crash at the Bahrain grand prix as one of the worst days of his life.

He is wrong, because Mazepin topped the Drivers Losers Points in Bahrain. In the eyes of the F1 Losers League, that makes it one of the best days ever, like remembering you had a Twix you hadn't eaten, or finding candy floss in a hedge.

His team mate Mick Schumacher pootled into last place which added to Haas's Loser Points, but they weren't the worst constructor. That accolade goes to Alpine whose food-based mishap propelled them to extraordinary levels of loserdom.

Raikkonen, Giovinazzi, Ocon, Russell, Vettel and Schumacher earned 1, 2, 3, 4, 5 and 6 respectively for finishing outside the top ten. Latifi, Mazepin, Gasly and Alonso all get 10 points each for retiring, with Mazepin picking up another 5 points for the Earliest Exit for binning his car so spectacularly quickly.

Leclerc only dropped from fourth in qualifying to a sixth-placed finish, but it was enough for him to get the 5-point Backwards Bonus. And, of course, we're shocked and horrified at anyone winning a grand prix, so Hamilton gets minus-25 point Race Win penalty: a penalty that so nearly went to Verstappen.

We're awarding Mazepin a Beige Flag for coming into this season under a massive cloud, with on-track and off-track behaviour so vilified, there was a #WeSayNotToMazepin trending hashtag. Vettel gets a Beige Flag for rotten pre-season testing and for breaking yellow flag rules in Bahrain. And Ocon gets a Beige Flag because Mika Hakkinen called him untrustworthy, and it feels like such a burn. 10 points to each of them.
In summary: Mazepin 25 | Vettel 15 | Ocon 13 | Latifi 10 | Gasly 10 | Alonso 10 | Schumacher 6 | Leclerc 5 | Russell 4 | Giovinazzi 2 | Raikkonen 1 | Hamilton -25
See how this affected your Losers Team here.

Alfa Romeo, Alpine, Williams, Aston Martin and Haas received 3, 3, 4, 5 and 6 for their cars finishing outside the top ten. Williams, Haas, AlphaTauri and Alpine each get 10 points for retiring out of the race. Haas pick up that Earliest Exit 5-pointer, Ferrari get 5 points for the Backwards Bonus, and the indefatigable Mercedes earned themselves the minus-25 point Race Win penalty.

We're giving two Beige Flags to constructors for the Bahrain grand prix. Firstly, Mercedes. Despite winning the race, their pre-season preparation was such a struggle, you could feel the tectonic plates of F1 shifting. And Toto Wolff called the car "a little diva", which just gave us pictures of the W12 demanding gin and flowers in the pit garage. Have a Flag and 10 points, sir.

Secondly, Alpine. Cars retire for a whole host of complicated reasons, but dropping out of the race because there was a sandwich wrapper stuck in Fernando Alonso's brake duct is just ridiculous. Is this where the mechanics store their sandwiches? Are Alpine operating a Subway franchise on the quiet? *This* is the scandal of the Bahrain grand prix, not track limits. We'll let Alonso off, but his team Alpine pick up 10 Beige Flag points because their cars should be less peckish.

Here are the Losers Team scores for Bahrain.

The next grand prix is in Italy on April 18th, so there's a bit of a wait. We'll launch the first Pitlane Punts on April 21st. The Portuguese grand prix at the start of May will be a DRS race, although you can move that DRS allocation to a different race if you want.